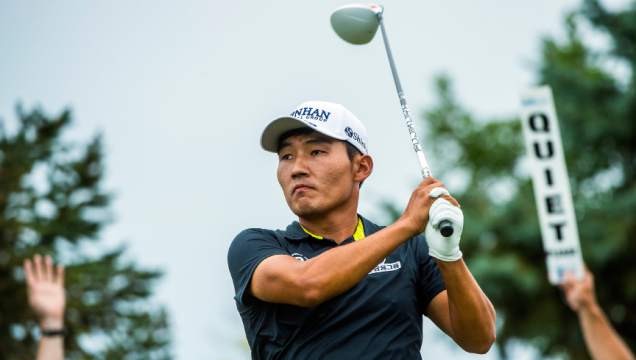 Phil Mickelson made a splash in the AT&T Pebble Beach National Pro-Am, only to be upstaged by Sung Kang of South Korea.

The 28-year-old Kang carded a course-record 11-under-par 60 at Monterey Peninsula Country Club and was tied for the lead with Hiroshi Iwata of Japan midway through the old Crosby Clambake at Pebble Beach.

Kang didn’t even realize exactly what he had done because he thought the par was 72, as it is at the other two tournament courses, Pebble Beach and Spyglass Hill.

“I thought I shot 61,” said Kang, who won three times on the Korean PGA Tour but is winless in the United States. “The last three weeks, I wasn’t really hitting it very good. After that I found my game a little bit, but I was putting too much pressure on myself. I was trying too hard.

“So now, I’m just going … yeah, I don’t have any pressure even if I miss a shot or hit it bad. My family is still going to love me. Nobody’s going to hate me.”

Kang started on the back nine and recorded four birdies and an eagle on the 16th hole, then added five birdies on the back, including three in a row through No. 8.

Iwata, who won twice on the Japan Golf Tour but also is winless in the U.S., backed up an opening 66 at Monterey Peninsula with an identical score at Pebble, including a 10-foot eagle putt on the sixth hole.

Mickelson, who has won the AT&T four times, carded a 65 at Monterey Peninsula, where he birdied five of the first eight holes and made an eagle on the 10th hole, and was one stroke back in a tie for third with third with first-round leader Chez Reavie, who followed a 63 at Monterey Peninsula with a 70 at Pebble, and Freddie Jacobson of Sweden, who had a 69 at Spyglass.

“My game is pretty much there,” said Mickelson, seeking his first victory since the 2013 Open Championship at Murifield. “The last piece is mental, performing under pressure.”

On why he plays so well on the Monterey Peninsula, he said: “I think, first of all the setting is spectacular. But the greens being poa annua are what I grew up on, so it’s a grass I feel comfortable on. Not just putting, but chipping on, hitting full shots into.”

Justin Rose of England was another shot back in sixth after a 68 at Monterey Peninsula, while Ricky Barnes of Stockton totaled 70 at Pebble and was three strokes behind in a tie for seventh with Mark Hubbard, who shot 66 at Spyglass, and Roberto Castro, who came in at 70 at Spyglass.