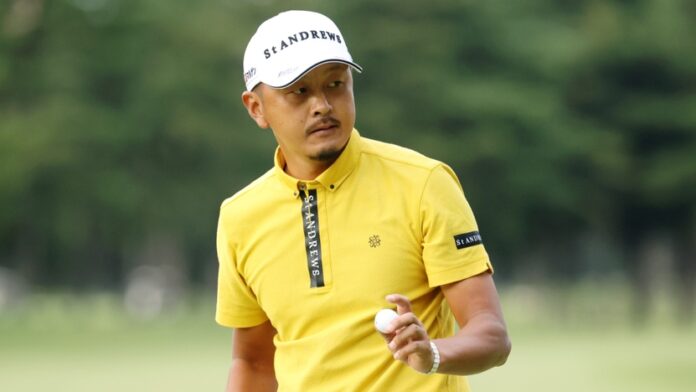 Hiroshi Iwata of Japan is playing in a PGA Tour event for the first time since 2017 and he has the lead.

The 40-year-old Iwata opened with a 7-under-par 63 to take a one-stroke lead over Japanese national hero Hideki Matsuyama and Joaquin Niemann of Chile at Narashino Country Club in Chiba, Japan.

“I got off to a good start, but I’m in the spotlight now and I’m done for, so please leave it alone,” joked Iwata, who said he was motivated a few days earlier when someone at the course thought he was a caddie.

“A lot happened earlier in the week. Someone asked me if I was a caddie when I was having a meal. Events like that get you more fired up to play well than someone giving you compliments. I don’t want to get into the details, but this person was not a player.”

Iwata, whose best finish on the PGA Tour was a tie for fourth in the 2016 AT&T Pebble Beach Pro-Am, started at No. 10 and made four birdies and a bogey before holing an eagle putt at No. 18, and added two birdies on a flawless back nine.

Matsuyama, the reigning Masters champion, and Niemann both collected three birdies on each nine in their bogey-free 64s.

“I’ve shot 6-under the last few tournaments on the first day and I just hope I can keep it going this time,” said Matsuyama, who had most of the 5,000 masked spectators allowed on the course following his group.

“We play in front of a lot of fans on the PGA Tour States-side, but to be able to play in my home country in front of so many Japanese fans. It was a thrill, and I’m glad I played well today.”

Matt Wallace of England had four birdies on his back nine and is fourth after a 65, while Brendan Steele of Idyllwild and UC Riverside is fifth following a 66 after opening with an eagle on the 10th hole and closing with a birdie at No. 9.

Cameron Tringale of Mission Viejo birdied four of the last six holes to shoot 67 and is in a tie fir sixth with Tommy Fleetwood of England, who eagled Nos. 6 and 18, Jhonattan Vegas of Venezuela, Matt Jones of Australia, Kramer Hickok, Ryosuke Kinoshita of Japan and Adam Schenk.

Will Zalatoris, the 2020-21 PGA Tour Rookie of the Year, is tied for 21st at 69; fifth-ranked Xander Schauffele of La Jolla and San Diego State, who captured the Olympic Gold Medal in Japan in August, shot 70 and is tied for 29th, while fifth-ranked Collin Morikawa of La Canada Flintridge and Cal, who won the Open Championship at Royal St. George’s in July, totaled 71 and is tied for 42nd.