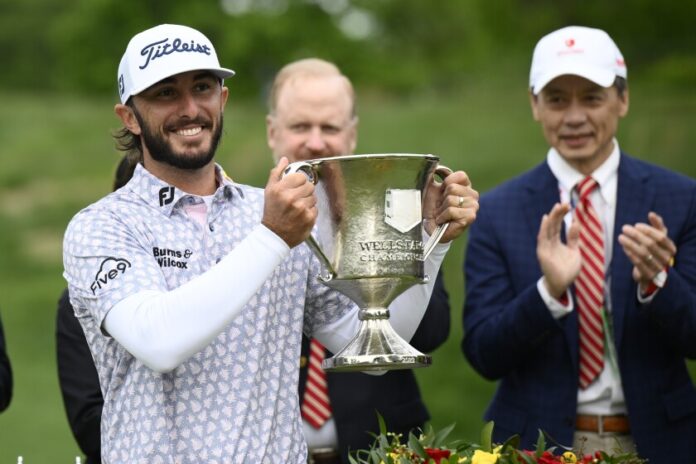 Max Homa proved once again that he is a winner.

The 31-year-old Homa, from Valencia and Cal, closed with a 2-under-par 68 to beat Keegan Bradley, rookie Cameron Young and Matt Fitzpatrick of England by two strokes in cold, windy conditions in the Wells Fargo Championship TPC Potomac at Avenal Farm Golf Club in Potomac, Md.

“I feel like I’m just coming into my own,” said Homa, who claimed his fourth victory on the PGA Tour, including two this season and all since the 2019 Wells Fargo Championship. “I’ve played some really good golf this season, I really believe in myself and just want to keep it going.

“I knew there were a lot of good golfers out there making moves, but I was just concentrating on what I was doing and tried to hit more good shots than anyone else. I knew I was playing well and just wanted to outlast everybody else.

“I hit the ball really well all week and it was nice to see my putter catch fire.”

Homa, who won the NCAA Individual Championship and the Pacific 12 Conference Championship in 2013 for Cal, took charge by making three of his five birdies on the front nine and overcame two bogeys coming home to finish at 8-under 272.

Bradley, the 2011 PGA champion, took a two-stroke lead into the final round but lost it when he hit into a fairway bunker en route to make a double-bogey on the second hole and did exactly the same at No. 11, but stayed in the hunt with five birdies before making a bogey on the last hole when he had a chance to tie Homa and finished at 72.

“I’m happy with the way I hung in there, but I didn’t play well enough to win,” said Bradley, who hasn’t won since his fourth PGA Tour victory in the 2018 BMW Championship, but has finished in the top 11 in five of his last seven events. “I hit the ball well most of the week, but played awful today and made some putts to keep myself in it.

“I’m actually playing as well as I’ve ever played in my life and have given myself some chances to win in the last few months. If I keep playing well and putting the way I have been, maybe I can win again sometime soon.”

Young, still seeking his first PGA Tour victory despite three runner-up finishes this season, collected five birdies in a 66 to wind up in the tie for second along with Fitzpatrick, a seven-time winner as a pro, who carded a bogey-free 67.

Seventh-ranked Rory McIlroy, the defending champion, posted a second straight 68 after making the cut on the number and was four shots back in solo fifth, while Stefan Jaeger of Germany put up a bogey-free 66 to wind up one more down in a tie for sixth with Lanto Griffin, who finished at 67, and Anirban Lahiri of India, who wound up at 71.

Jason Day of Australia, the leader after each of the first two rounds after starting 63-67 before struggling to a 79 in the third round, shot 70 and wound up in a tie for 15th.