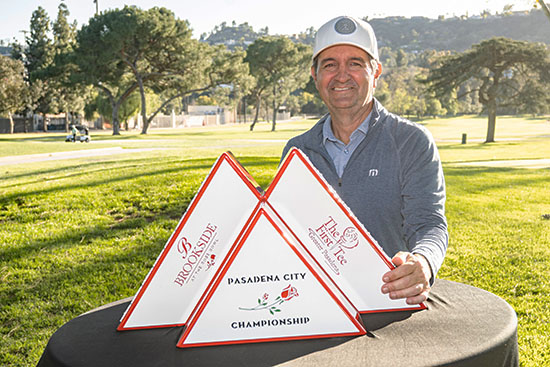 Tim Hogarth of Northridge captured the Pasadena City Championship for the fourth straight time and record eighth overall, beating Pete Griffith of Westlake Village by four strokes at Brookside Golf Club on the grounds of the Rose Bowl in Pasadena.

“I’ve never seen Brookside play this firm and fast,” said Hogarth, the 1996 U.S. Amateur Public Links champion who also has won the Los Angeles City Championship nine times. “It was a challenge that I haven’t seen in the 20 years that I’ve been playing the Pasadena City.

“ … 70 years ago, legendary amateur Bruce McCormick won four consecutive Pasadena City tournaments. I am very proud to be able to put my name alongside his.”

This time, Hogarth bounced back from that opening 75 and took a two-stroke lead with his third birdie of the back nine on the 17th hole in the final round before Griffith closed with a double-bogey 6.

Hogarth also made an eagle on the seventh hole in his third-round 67.

Hogarth’s seventh Pasadena City title came in 2019, as last year’s tournament was cancelled because of the Coronavirus pandemic.