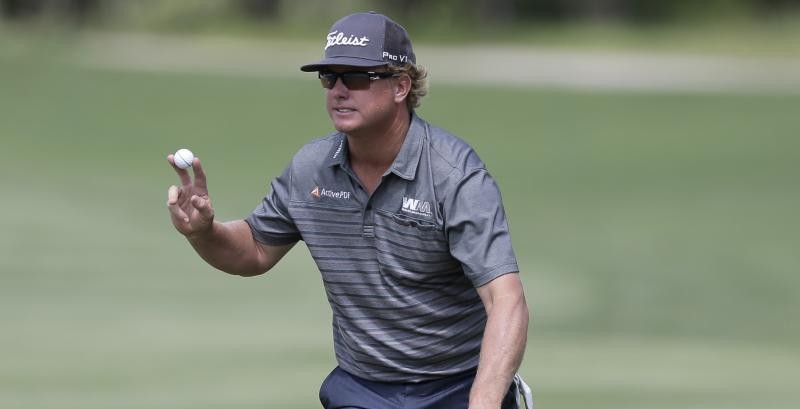 Charley Hoffman started the day with the lead, but wound up chasing most of the day before finally catching up.

Hoffman, from Poway and UNLV, birdied the last three holes including a 71-foot putt from the fringe on No. 18, to shoot 1-under-par 71 and tie Kevin Kisner for the lead after three rounds of the Arnold Palmer Invitational at Bay Hill Resort and Lodge in Orlando, Fla.

“I was just trying to get back to within one shot by the end of the round, to be honest,” said Hoffman, who has six PGA Tour victories, the last in the 2016 Valero Texas Open. “I stole one on 18. Pull hooked a 3-wood down there and then just tried to chase it up the front and was able to make it from the front of the green. Obviously, I’m going to feed off those last three holes going into tomorrow and sort of go from there.

” … To be in position at Arnie’s event is a special spot. It’s right up there with competing in a major championship, there’s no question. Mr. Palmer was the King, there’s a reason why he had the name. Without him we don’t have the PGA Tour, we don’t have the Golf Channel, we don’t have a lot of things. To keep his legacy going and win his event would be something special.”

Palmer passed away last September at the age of 87.

Kisner, whose only PGA Tour victory came in the 2015 RSM Classic, made a bogey on the last hole to post a 68 and was even with Hoffman at 11-under 205.

“(The course) is almost a perfect combination of tough, but with some chances to make birdies if you hit good shots,” said Kisner, who also lost three times in playoffs on the circuit in 2015 to Jim Furyk, Rickie Fowler and Danny Lee of New Zealand.

“I know these guys out here are good and they are not going to back up, so you’ve got to keep making birdies to keep your lead.”

67 and was three shots back in a tie for third with Marc Leishman of Australia, who made a bogey on the last hole of a 71, and Matthew Fitzpatrick of England, who totaled 72.

Adam Hadwin of Canada, who claimed his first PGA Tour victory last week in the Valspar Championship, shot 69 and was another shot behind in a tie for sixth with Lucas Glover, the 2009 U.S. Open champion, who finished at 72.

Third-ranked Rory McIlroy of Northern Ireland recorded a brilliant, bogey-free 65 and was five down in a tie for eighth with Kyle Stanley and Greg Chalmers of Australia, who both came in at 69.

“It’s sort of a score I was waiting on,” said McIlroy, who has been inconsistent since returning recently after being sidelined for seven weeks by a rib injury. “I felt like it was in there. It was just a matter of trying to put it all together, and today I did.”

Rickie Fowler of Murrieta sank a 14-foot eagle putt on the 16th hole to match McIlroy for the low score of the day at 65 and was in a tie for 11th that included Olympic gold medalist Justin Rose of England, who wound up at 70.

Second-ranked Jason Day of Australia struggled to a 75 and skidded to a tie for 39th.