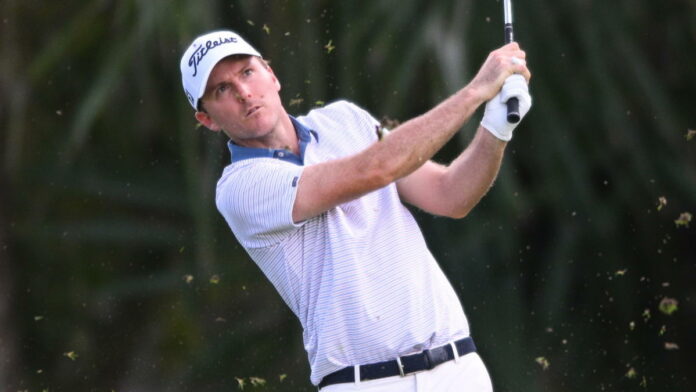 “I felt great the last two days and I feel really comfortable with my game right now after having a slow start to the season,” said Henley, who claimed the last of his three PGA Tour victories in the 2017 Shell Houston Open. “I’m hitting the ball well off the tee and making some putts, and that’s a good combination.

“I played pretty well in the last two rounds of the CJ Cup (in which he tied for 45th) and then just went home and worked some more on my game because it seemed to be coming around, and I felt really good coming into this week.

Henley, who won three times on what is now the Korn Ferry Tour, started on the back nine and carded three straight birdies through No. 13 and another at No. 17 before making the turn. Before making another on the third hole and three more in a row through the eighth while recording a 36-hole score of 16-under 126.

Ryder, who has won three times on lower tours but is seeking his first title on the PGA Tour, collected seven birdies on the front nine before making two bogeys and a birdie on the back in a 65, while Gordon, also looking for his first PGA Tour victory, followed his opening 62 with a bogey-free 67.

“I didn’t really miss a shot on the opening nine,” said Ryder, who sank a 40-foot birdie putt on the first hole to kick-start his round and held a five-stroke lead through nine holes. “But it’s impossible to not know that, ‘OK, I’ve got five shots on the field right now,’ or you know, it creeps in.

“I made one uncommitted swing (which led to a bogey at No. 10), and I don’t know how my putt on No. 17 missed, but I made plenty. The hole was looking pretty big. Any time I got to within 20 feet, I felt like I had a good chance.”

Patton Kizzire made his only bogey on the second hole and then reeled off seven birdies en route to a 65 and is four shots back in a tie for fourth with David Lingmerth of Sweden, who birdied four of his last six holes while finishing off a 66 on the front nine.

Brian Harman made a hole-in-one from 113 yards at No. 4 and birdied the next three holes on his way to a 66 and is six behind in a tie for sixth with Harry Higgs, who eagled the third hole and added seven birdies in a bogey-free 62, and Martin Laird of Scotland, who made five birdies and a single bogey in a 67.

“I watched both the guys in front of me hit pitching wedge, and I figured I could hook a 50-degree and get it there,” said Harman, who made his third ace on the PGA Tour, the other two coming in the final round of the 2015 Barclays. “It hit and we got to watch it spin right back. That was my first ace since I got two in one day.”

Maverick McNealy of Portola Valley and Stanford shot a bogey-free 68 and is nine strokes down in a tie for ninth with Matt Kuchar, who had a bogey-free 67; Greyson Sigg, who overcame six bogeys with an eagle and eight birdies in a wild 67; Patrick Rodgers of Stanford, who had seven birdies in a 67, and Scott Piercy, who made three straight birdies down the stretch for a 68.

Ninth-ranked Collin Morikawa of La Canada Flintridge and Cal bounced back from a 71 with four birdies on each nine in a bogey-free 63 and is in a tie for 14th that includes two-time defending champion Viktor Hovland of Norway, who made one bogey in a 69, while second-ranked Scottie Scheffler had two late bogeys in a 71 and is tied for 29th.