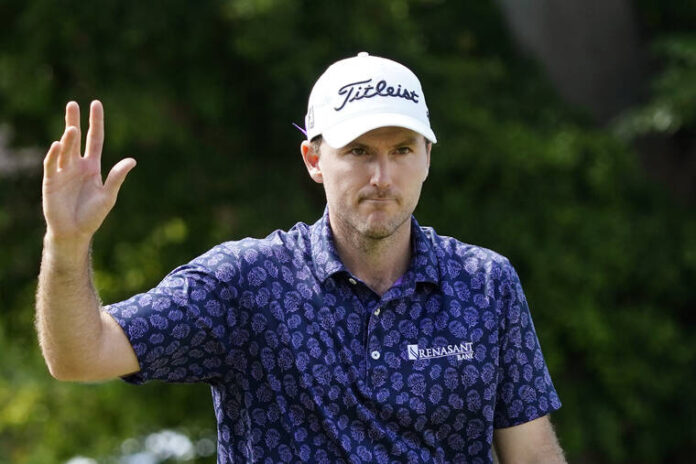 Russell Henley showed again that he knows his way around Waialae Country Club.

The 32-year-old Henley made eagles on the last hole of each nine while shooting seven-under par 63 to take a three-stroke lead over Haotong Li of China midway through the Sony Open in Hawaii in Honolulu.

“I’ve won three times (on the PGA Tour) and it’s always nice to come back to a place where you’ve won before,” said Henley, who captured the 2013 Sony Open. “I feel comfortable out here and it’s a cool place to start the year.

“It was nice to finish like that. I don’t remember the last time I had two eagles in the same round, but it’s definitely exciting. The first few holes (after starting at No. 10), I was not quite on, especially on my tee shot, but I played great on my back nine, made a lot of putts and played super-solid. The front I started hitting a few more fairways and giving myself some good looks and executing there from 10-to-15 feet or less.

“There’s a long way to go so I have to keep my game going for the next few days.”

Li, 26, who has won six times as a pro but never on the PGA Tour, made three birdies on each nine and a single bogey at the sixth hole, followed an opening 63 with at 65.

“I didn’t drive the ball very well on the front nine, but make some good putts for birdie and to save par,” said Li, who finished third in 2017 Open Championship at Royal Birkdale Golf in Southport, England.

“I hit some really good tee shots, drove the ball better on the back nine, and was able to make a nice score.”

Matt Kuchar, who won the 2019 Sony Open in Hawaii in a playoff over Brendan Steele of Idyllwild and UC Riverside, shot a bogey-free 65 and is four shots back in third, followed one more back by Michael Thompson, who birdied his last hole for a bogey-free 67.

Defending champion Kevin Na of Diamond Bar, who held the lead with an opening 61, followed with a 71 and is in a tie for 16th that includes Maverick McNealy of Portola Valley and Stanford, who had a 67, while 10th-ranked Cameron Smith of Australia, who won the Sentry Tournament of Champions at Kapalua last week, wound up at 67-71—138 and missed the cut by three strokes.