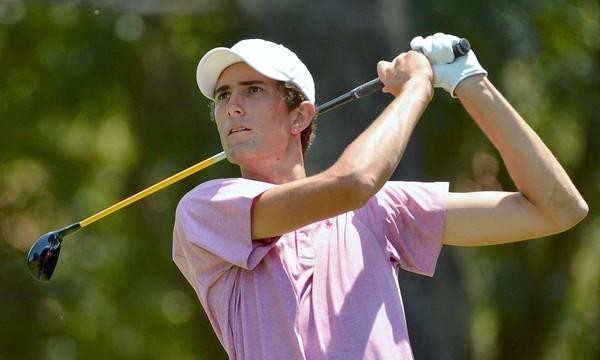 Stewart Hagestad of Newport Beach reached the championship match of the 36th U.S. Mid-Amateur Championship, winning the last three holes for a 4-and-2 victory over Scott Strickland of Birmingham, Mich., on the Old Course at Stonewall Golf Club in Elverson, Pa.

In the final, the 25-year-old Hagestad will play Scott Harvey, of Greensboro, N.C., the 2014 U.S. Mid-Amateur champ, who needed 19 holes to turn back Dan Sullivan of Pasadena.

“I just played a little bit better golf,” said Hagestad, who lost to Harvey in a sudden-death playoff at the George C. Thomas Invitational at Los Angeles Country Club in June. “I knew that if I could kind of get it to the back nine and trust myself and commit to hitting good shots that hopefully I’d be OK.”

Hagestad hit his approach shot to within six inches of the cup on the par-4 14th hole take a 2-up lead and won the next two holes with conceded pars to end the match.

Harvey, who will try to become the sixth multiple winner of the tournament, two-putted for a winning par on the first extra hole after Sullivan could not get up-and-down for par from a greenside bunker.

In the quarterfinals, Hagestad downed Michael McDermott of Bryn Mawr, Pa., 2 up, while Harvey defeated David May of Auburn, N.Y., 4 and 3. In the other two matches, Sullivan got past Josh Irving of Dallas, 2 and 1, and Strickland beat Michael Muehr of Potomac Falls, Va., 1 up.