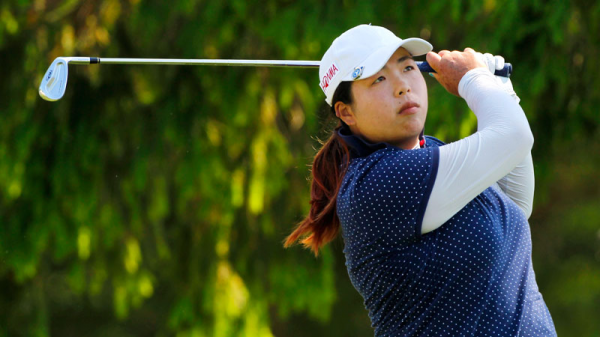 Shanshan Feng of China took advantage of perfect morning conditions and carded a 6-under-par 66 to take a one-stroke lead over Michelle Wie and Se Ri Pak of South Korea after one round of the Kraft Nabisco Championship on the Dinah Shore Tournament Course at Mission Hills Country Club in Rancho Mirage.

The 24-year-old Feng, who has three victories on the LPGA Tour including the 2012 LPGA Championship to become the first Chinese player to win a major, recorded seven birdies and had her only bogey at No. 15.

“This morning, it was playing easier because there was no wind,” said Feng, who has won 11 times as a pro. “The pin positions weren’t that hard. We actually had a lot of birdie chances.

“I did play with Amy Alcott today. She’s won three times here in the past, and after my first drive off the first tee I was asking her, I said, ‘Can you tell me the secrets about winning here?’ Because before this year I never did well here. So she was telling me all the secrets.”

Wie was tied for the lead after making three birdies and an eagle in a four-hole stretch through No. 12, but lipped out a three-foot putt for par on the 17th hole and settled for a 67.

Pak, 36, who has five major titles in her career but has not won the Kraft Nabisco, collected six birdies and made her only bogey at No. 8 in matching Wie’s 67.

Angel Yin, a 15-year-old from Arcadia whose parents moved from China to the United States 16 years ago, had six birdies in a round of 68 and was tied for fourth with Amy Yang of South Korea.

Cristie Kerr, a two-time major champion looking for her first victory in the Kraft Nabisco, wound up at 69 and was tied for sixth with Jennifer Rosales of the Philippines and USC, and Jiyai Shin of South Korea, who captured the Women’s British Open in 2008 and 2012.

Defending champion Inbee Park, No. 1 in the Women’s World Golf Rankings, struggled to a 74 and was tied for 46th.