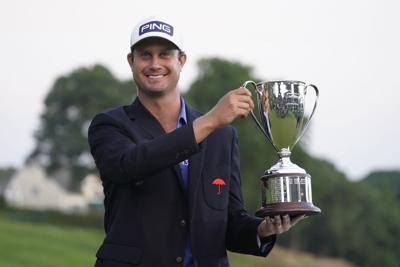 Harris English wasn’t even sure how many playoff holes it took for him to turn back Kramer Hickok.

The 31-year-old English sank a 25-foot birdie putt on the eighth playoff hole to finally beat Hickok, who was seeking his first PGA Tour victory, in the 69th annual Travelers Championship at TPC River Highlands in Cromwell, Conn.

“That was just awesome,” said English, who claimed his fourth PGA Tour victory, including the Sony Tournament of Champions in January with a birdie on the first playoff hole to beat Joaquin Niemann of Chile. “Hats off to Kramer, what a competitor. The fans are were incredible, they are always great here and they kept us in it.

“We just kept grinding it out, making seven-footers to keep it going for seven or eight holes, I don’t even know how many, and that’s what it’s all about. It’s just great that we were able to give them a good show.”

English, who finished third in the U.S. Open in his last start, and Hickok tied for the second-longest sudden-death playoff in PGA Tour history with their eight extra holes, which has happened five other times, the last when John Huh to beat Robert Allenby in the 2012 Mayakoba Classic.

The longest playoff in PGA Tour history went 11 holes in 1949, when Lloyd Mangrum and Cary Middlecoff were declared co-champions after darkness halted play in the Motor City Open.

The 29-year-old Hickok, who won three times on lower tours after turning pro in 2016, recorded his third top-10 finish on the PGA Tour after tying for eighth in the Bermuda Championship last November and tying for 10th in the 2019 Corales Puntacana Resort and Club Championship.

“I’m tired because I played 26 holes today, but it was a great experience,” said Hickok, who won twice on the Korn Ferry Tour. “It’s tough to make birdies on 17 and 18, the playoff holes, and we both just barely missed some.

“Harris hit some great shots today and came out on top like the great champion he is. I battled him and I’m happy with the way I played today. I think I handled the pressure well and I will take this forward to help me in my career.”

Hickok has missed the cut on the PGA Tour 36 times since 2016, but fans at TPC River Highlands were chanting: “Let’s go, Kramer, let’s go Kramer.”

English, who has seven top-10 finishes on the PGA Tour this season and rose of second in the FedEx Cup rankings, made his lone bogey at No. 17, but had three birdies on each nine including a 28-foot birdie putt on the final hole of regulation to shoot 5-under-par 65 set the target at 13-under 267.

Hickok came along a while later and closed out his 67 with a 10-foot birdie putt on the 18th hole to force the playoff.

Marc Leishman of Australia, who won the Travelers in 2012, closed with a bogey-free 64 and was one stroke back in third, followed one more behind by Abraham Ancer of Mexico, who finished with a 65.

Eighth-ranked Brooks Koepka made his only bogey on the first hole in another 65 and was three shots back in a tie for fifth with Kevin Kisner, who collected six birdies on the back nine in a 63 that was low score of the day, Hank Lebioda (66), Brian Harman (67) and Brice Garnett (68).

Beau Hossler of Rancho Santa Margarita holed out for an eagle en route to a 64 and wound up four strokes down in a tie for 10th with Sepp Straka of Austria, who shot 66, and Jason Day of Australia, the 63-hole leader after a 62, who closed with a second straight 70.

Seventh-ranked Patrick Cantlay of Los Alamitos and UCLA tied for 13th following a 63, while Bubba Watson, trying to win the Travelers for the fourth time, led for much of the day before finishing bogey-bogey-bogey-double bogey-bogey for a 73 to wind up in a tie for 19th that included sixth-ranked Bryson DeChambeau of Clovis, who wound up at 70.

Second-ranked Dustin Johnson totaled 71 and finished in a tie for 25th that included ninth-ranked Patrick Reed, who had a 69, while two-time Travelers champion Phil Mickelson posted a 69 to tie for 61st.