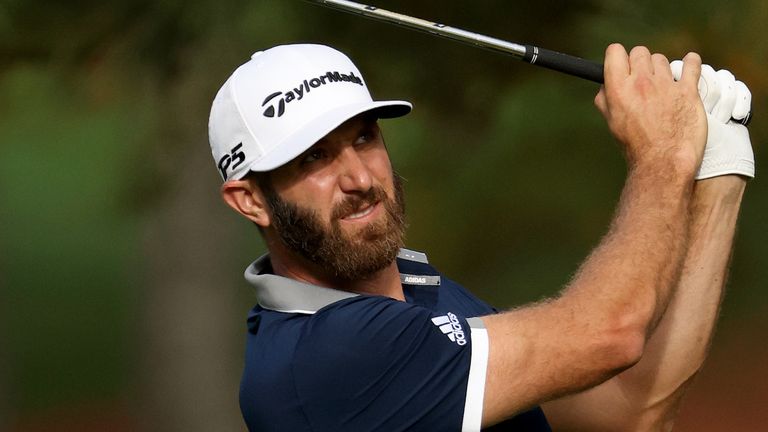 Top-ranked Dustin Johnson is seeking his first Green Jacket and almost seemed to have an arm in one sleeve during the second round.

DJ returned Friday morning to finish off a bogey-free 7-under-par 65 that tied for the lead and held a three-stroke lead midway through the second round before shooting 70 and is tied for the lead with third-ranked Justin Thomas, Abraham Ancer of Mexico and Cameron Smith of Australia in the 84th Masters at Augusta National Golf Club in Augusta, Ga.

Play was suspended by darkness for the second straight day because things were backed up by a three-hour rain delay early in the first round. Tournament officials hope to get back on schedule Saturday by making the 36-hole cut after the second round is completed and immediately starting round three.

The traditional first major of the season was postponed from April to November because of the Coronavirus pandemic, making it challenging to stay on schedule because of the delay since darkness comes sooner at this time of year.

“I felt like I played really well, hit a lot of good shots and had a lot of looks at birdies, but couldn’t quite get it in the hole (in round two),” said Johnson, who tied for second in the Masters last year and whose only major title came in the 2016 U.S. Open at Oakmont. “I was happy to finish with a birdie on the ninth. I thought I hit a lot of good putts that just didn’t seem to want to go in the hole. And I didn’t take advantage of the par-5s.

“I felt like I hit the ball just as well in the afternoon, but just didn’t score. I got off to a good start, but then made a couple bogeys. But I’m pleased with the way I’m swinging and just have to read the greens a little better to give myself a chance on the weekend.”

Johnson, who missed two tournaments in the build-up to the Masters after testing positive for Covid-19 before returning with a tie for second last week in the Vivint Houston Open, eagled the second hole and added five birdies in his 65.

DJ birdied three straight holes early in his second round before cooling off by making two straight bogeys and running off 11 straight pars ahead of his closing birdie.

Thomas, who opened with a 66, made two early bogeys after starting round two on the back nine and had a double-bogey 6 at No. 1, added seven birdies including two at the finish to post a 69.

“You have to really throw all past knowledge out the window this week, as weird as it is,” Thomas said about changes to the course because of the time of year. “A lot of the history and things that you know about the golf course, it can sometimes hurt you this week because of what you’re used to.

“You have to drive the ball well and then hope you don’t get any mud balls so you can be aggressive and attack when you have the opportunity. I got off to a slow start today, but was able to make some birdies coming in.

“The course in a little different, but I’m sure it’s going to produce a great tournament, as always.”

Ancer, who has two pro victories including the 2018 Emirates Australian Open, opened round two with a bogey but then collected six birdies to follow his opening 68 with a 67, while Smith, whose victory in the 2020 Sony Open was his fourth as a pro, eagled the 15th hole before three straight birdies finished off a 68 after his first-round 67.

Said Ancer, who is playing in his first Masters: “I just stayed patient and played really well. A lot of guys on the PGA Tour win the first time they play somewhere, but I’m not going to think about that, and just keep doing my thing to see what happens on Sunday.”

Said Smith: “I made some lazy bogeys on the front nine, but was happy to get hot like that at the end. The greens were a little slow yesterday, but speeded up this morning. If I can keep playing the way I am, I could be right up there (on Sunday).”

Tenth-ranked Patrick Cantlay of Los Alamitos and UCLA followed an opening 70 with a 66 that included seven birdies and is one stroke back in a tie for fifth with Sunjae Im of South Korea, who had a 70 to go with his opening 66.

Second-ranked Jon Rahm of Spain opened with a 69 and was 5-under through 12 holes, and also in that tie for fifth along with Hideki Matsuyama of Japan, who shot 68 in round one and was 4-under after 15 when darkness came.

Danny Willett of England, the 2016 Masters champion, is at 71-66 and two shots behind in a tie for ninth with two other Englishmen, Tommy Fleetwood, who also shot 71-66, and Justin Rose, who totaled 67-70.

Louis Oosthuizen of South Africa, the 2010 Open champion, opened with a 68 and was 3-under through 12 and part of the tie for ninth along with and C.T. Pan of Taiwan, who started with a 70 and was 5-under after 16 in round two.

Eighth-ranked Xander Schauffele of La Jolla and San Diego State was 1-under through 12 holes after opening with a 67 and was tied for 14th, defending champion Tiger Woods, who opened with a 68, was even-par after 10 holes in a tie for 22nd.

Fifth-ranked Rory McIlroy of Northern Ireland, making his sixth bid to complete the Career Grand Slam by winning the Masters, rallied to finish two rounds at 76-55 and is in a tie for 27th that includes seventh-ranked Webb Simpson, the 2012 U.S. Open champion, who shot 67 in the first round and was 2-over through 14 in round two.

Fourth-ranked Collin Morikawa, the PGA champion from La Canada Flintridge and Cal, shot 70-74 and was right on the cut-line in a tie for 50th, while sixth-ranked Bryson DeChambeau of Clovis, the U.S. Open champion, started with a 70 and was 3-over after 12 holes thanks to a triple-bogey 7 because of a lost ball at No. 3 and was one outside in a tie for 61st.

Ninth-ranked Tyrrell Hatton of England wound up at 73-74 and was on his way home.