The USC Trojans were the only California school to advance to the match play portion of the Men’s NCAA Championship. In a change of format instituted just this year, the top eight teams after three rounds of stroke play advanceto a match play format, where USC was pitted against the Michigan Wolverines. USC wasplaying phenomenally well going into the match play format, as they came from a 12th place tie after the second round to finish in third place after carding the lowest closing round from all teams. Unfortunately, the Trojan luck ran out and they fell in the first round to the Wolverines 3-2. 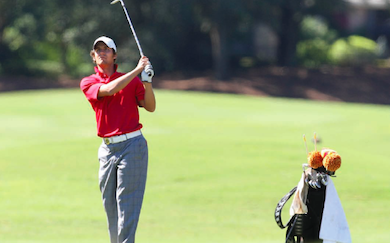 Senior Tom Glissmeyer was the individual leader for the Trojans with a T3 individual finish.Texas A&M captured the title over Arkansas in the final match play event. Other California schools that did not advance into match play included the University of San Diego (13) led by Alex Ching, the Stanford Cardinal (20) led by Steve Ziegler, and the 2008 champion Bruins who had a disappointing tournament finishing in a tie for 23rd.