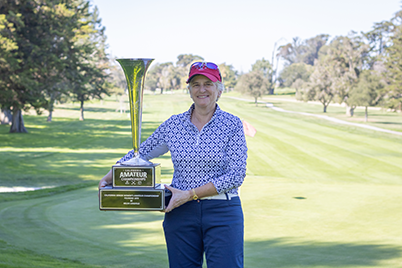 The 59-year-old Cowan, a member of the Northern California Golf Association Hall of Fame, captured the 44th annual California Senior Women’s Amateur Championship by one shot over Evelyn Orley of Cardiff by the Sea at Santa Maria Country Club.

“State Ams are pretty cool. It’s nice to add another one to my resume. I really didn’t have many  mistakes throughout the tournament. I putted really well each day. That and, as I said, I didn’t really make many mistakes.”