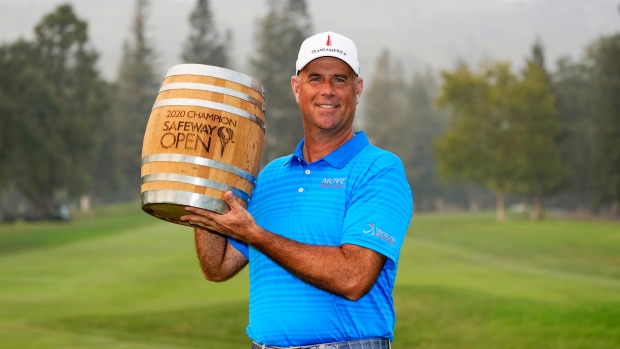 Stewart Cink is 47 years old, but he didn’t act his age in the final round of the Safeway Open.

Cink claimed his seventh PGA Tour victory and first since the 2009 Open Championship at Turnberry by closing with a 7-under par 65 to beat Harry Higgs by two strokes on the North Course at Silverado Resort and Spa in Napa.

“It’s amazing to win at 47,” said Cink, who has beaten cancer along with his wife, Lisa, in the last few years and had his son, Reagan, as his caddie. “I’ve had my chances to win since Turnberry and it didn’t happen, so it was great to get it done again.

“It was a special week with Reagan on the bag and with Lisa here, too. We just wish Connor (his other son) was here because today is his birthday. It was a great week and just a special appearance.

“I thought nothing could every equal winning at Turnberry, but his might have done it.”

Cink, whose first victory came in the 1997 Canon Greater Hartford Open, had four birdies against a single bogey in the final round while shooting his second straight 65 to record a winning score of 21-under 167.

Higgs, who has two victories on the lower tours but none on the PGA Tour, got close with a six-foot eagle putt on the 16th hole but finished with two pars for a 68.

Doc Redman birdied his last six holes to record a bogey-free 62 early in the day and wound up three back in a tie for third with Chez Reavie, who collected seven birdies on the back nine in a second straight 66, Kevin Streelman, who had four birdies down the stretch in a 67, and Brian Stuard, who closed with a 70.

Sam Burns and Kristopher Ventura of Norway both shot 70 to wind up four shots behind in a tie for seventh, while Pat Perez of San Diego totaled 69 and was five down in a tie for ninth with J.J. Spaun (68), 18-year-old Akshay Bhatia of Northridge (68), Russell Knox of Scotland (70), and James Hahn of Alameda and Cal (72).

Sahith Theegala of Chino Hills and Pepperdine, the 2020 College Player of the Year, shot 70 to tie for 14th in his PGA Tour debut, two-time Safeway champion Brendan Steele of Idyllwild and UC Riverside tied for 29th after a 71, and Phil Mickelson, who won in his debut on the PGA Tour Champions his last start, closed with a 70 to tie for 44th.