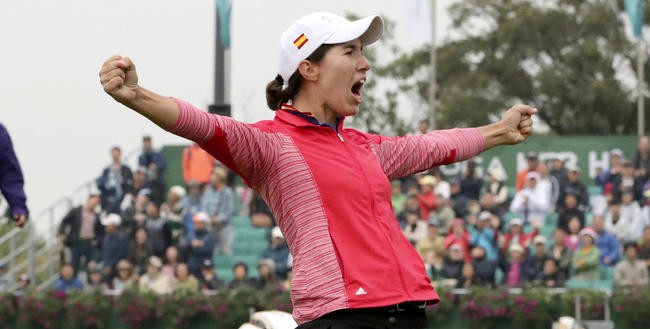 The 26-year-old Ciganda, who has won three times on the Ladies European Tour, denied Lee, from Valencia and UCLA, her first professional victory.

“It means the world me,” said Ciganda, who came from five strokes behind 54-hole leader Lee by closing with a 2-under-par-70. “It’s pretty nice to win here in Korea where women’s golf is so big.

“It’s been a long journey, but at the same time it’s really nice to get the win. I love competing and playing and being an athlete. I couldn’t ask for a better life. … I’m not going to lie, I was really nervous on the last three, four holes. But I was positive. I just tried my best and I tried to play each shot the best I could.”

Lee, 21, struggled to a 75 and fell five shots back when Ciganda seemingly took control with six birdies on the first 10 holes. However, Lee got back into it with birdies on the 15th and 17th holes while Ciganda played her last five holes in 4-over.

In fact, playing in the final group, Lee actually took a one-stroke to the final hole of regulation before hitting her approach into the water. She managed to get up-and-down for a bogey to get into the playoff.

Lee hit through the green on the extra hole before nearly holing a remarkable pitch for birdie, but Ciganda ended it by making her putt.

Afterward, Lee was in tears and declined to speak with reporters.

Shanshan Feng of China shot 70 and finished two strokes back in a tie for third with Min-Sun Kim of South Korea, while Brittany Lang stumbled to a 75 and was another shot back in a tie for fifth with Mi Jung Hur, who had a 70.

Cristie Kerr totaled 73 and wound up four strokes back in a tie for seventh with Seon Woo Bae of South Korea, who totaled 69, and Karine Icher of France, who wound up at 71.

Defending champion Lexi Thompson carded a 73 and tied for 13th.