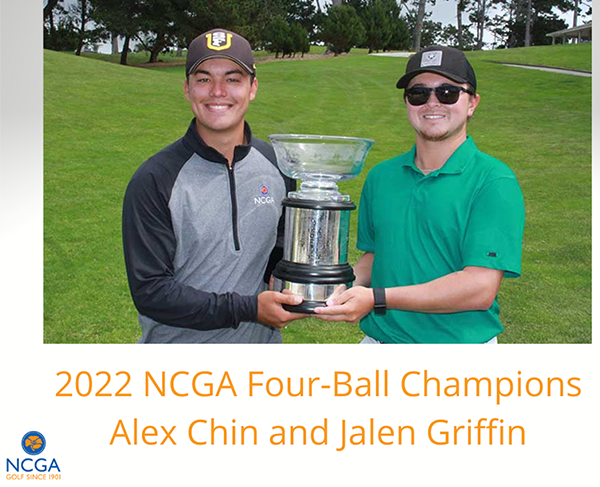 Alexander Chin of Pleasanton and Jalen Griffin of San Francisco rallied in the final round to capture the 55th Northern California Golf Association Four-Ball Championship by four strokes over brothers Jimmy and Johnny Castles of Cupertino at Spyglass Hill Golf Club in Pebble Beach.

The tournament was contested over 54 holes of four-ball stroke play, and the 63 recorded by Chin and Griffin in the final round was two strokes off the tournament record of 61 set by winners Ethan Farnham and Ethan Ashbrook last year.

“It was a pretty electric weekend,” said Griffin who is an assistant golf coach at USF. “The first day we were ham-and-egging it. The second day we had no bogeys and today was solid. Spyglass can eat you up real quick.”

Added Chin, a 23-year-old graduate student who still is playing for the Dons: “We play off of each other well. Keep the ball in play. If the first player is in the middle of the green, the second person can play aggressively.”

The NCGA Four-Ball Championship has been played every years since 1967 at Spyglass Hill, except for 2020, when it was cancelled because of the Coronavirus pandemic.