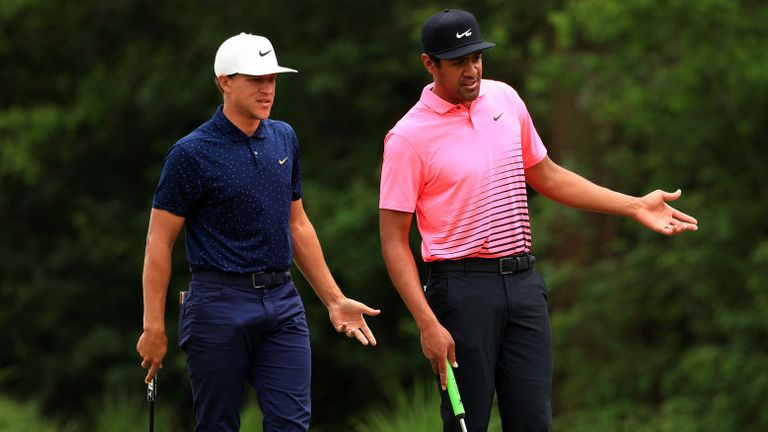 Cameron Champ of Sacramento and Tony Finau went a long way to catch Viktor Hovland and Kristoffer Ventura of Norway on top of the leaderboard.

Champ (pictured left) and Finau (right), two of the biggest hitters in golf, shot 4-under-par 68 in the alternate-shot format and are tied for the lead with first-round co-leaders Hovland and Ventura midway through the Zurich Classic of New Orleans at TPC Louisiana in Avondale, La.

“I know we’re having a good time with this format up to this point,” Finau said of the only team event on the PGA Tour. “We’ve both played some really solid golf, and we find ourselves at the top of the leaderboard.

“We’ll do what we’ve been doing the last couple days, which is enjoy each other’s company and not add any bonus pressure when it comes to teammate golf.”

Finau sank a six-foot birdie putt on the 18th hole after Champ left his putt short, and they finished with five birdies against a lone bogey at No. 12 to record a 36-hole score of 13-under 131.

Hovland and Ventura, who shared the first-round lead at 62 in the best-ball format, rattled off four birdies while finishing on the front nine to card a 69 and gain a share of the lead despite a double-bogey 6 on the 16th hole.

“It was my fault,” Ventura said with a laugh of the double bogey. “We tried to hit the fairway with an iron (off of the tee) and I hit it in that bunker. I wasn’t the best teammate.

“We’re just having fun, and obviously we don’t get to do this very often. We’re playing some good golf, and the course we both like, so it’s just one of those things where we’re comfortable playing out here.”

Henrik Stenson of Sweden and Justin Rose of England collected seven birdies and three bogeys in a 68 and are two strokes back in a tie for third with Bubba Watson and Scottie Scheffler, who made birdies on the first three holes of the back nine before Scheffler holed a nine-foot putt at No. 18 to cap a 69.

Richy Werenski and Peter Uihlein birdied three of the last six holes for another 69 and are three shots behind in a tie for fifth with Louis Oosthuizen and Charl Schwartzel of South Africa, who had a 71, while Marc Leishman and Cameron Smith of Australia totaled 72 and are one more down in a tie for seventh with Pat Perez of San Diego and Jason Kokrak, who shot 70.

Defending champions Jon Rahm of Spain and Ryan Palmer shot 71 and are five down in a tie for ninth with Rob Oppenheim and Grayson Murray (70), Cameron Percy and Greg Chalmers of Australia (70), Brendon Todd and Chris Kirk (70), Graeme McDowell of Northern Ireland and Matt Wallace of England (70), Keegan Bradley and Brendan Steele of Idyllwild and UC Riverside (73), and Billy Horschel and Sam Burns (73).

McDowell made the first hole in one of his PGA Tour career with a 4-iron on the 216-yard 17th hole.

“Get all the way back there, somehow,” McDowell yelled at the ball when it was in the air, and later said after plucking his ball out of the hole, “I’d have been very happy with anything dry there, but I’ll take a one.”

Nick Watney of Davis also made an ace, with 6-iron on the 224-yard 14th hole, but he and teammate Charley Hoffman of Poway could manage only a 74 and are tied for 24th, making the cut on the number.

Fifth-ranked Xander Schauffele of Torrey Pines and San Diego State and 10th-ranked Patrick Cantlay of Los Alamitos and UCLA struggled to a 74 and also made the cut on the number in that tie for 24th, which includes Danny Willett and eighth-ranked Tyrrell Hatton of England, who had a 73.

Matthew Wolff of Agoura Hills and fourth-ranked Collin Morikawa of La Canada Flintridge and Cal finished at 70-77—147 and missed the weekend by nine strokes.

The teams will play best-ball for the second time in the third round and alternate shot again in the final round.