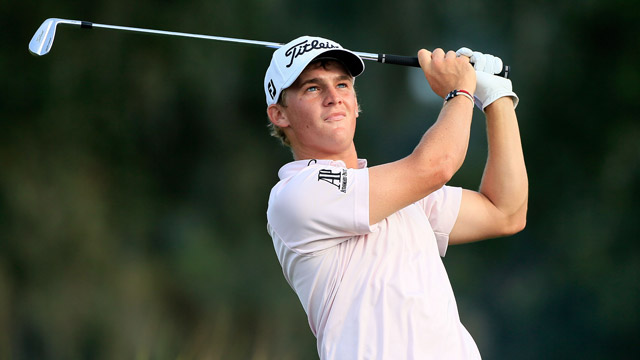 Bud Cauley rode the wind and his short game to a bogey-free 6-under-par 66 to tie for the lead with Tony Finau midway through the Valero Texas Open on the AT&T Oaks Course at TPC San Antonio.

Finau, who shot 65 including eight birdies and a hole-out eagle from 105 yards on the 11th hole, held the lead outright until making a bogey on the 18th hole and was even with Cauley (pictured) at 8-under 136.

“I scrambled really well,” said Cauley, who missed eight greens but saved par each time. “I didn’t drive it poorly but, you know, just with the wind out there it was tough to get some of the iron shots close. When I did miss the green I was able to leave it in a relatively easy spot and get up-and-down, which kind of kept my round going.

“I knew I was going to miss some greens. I got a lot out of my round today. I hit the ball really well yesterday and just kind of left some shots out there. Today was nice to scramble well and look forward to this weekend.”

“I did the same thing yesterday after going for the green (in two),” said Finau, who hit his approach into the creek on the final hole for the second straight day. About half of the ball was out of the water. I got up-and-down yesterday. I know lightning doesn’t always strike twice.”

Cameron Smith of Australia carded a 65 and was one stroke back in a tie for third with 51-year-old Bob Estes, who totaled 69, Kevin Chappell, of Fresno and UCLA, who had a 68, and Robby Shelton, who finished at 69.

John Huh of Los Angeles and Cal State Northridge posted a 71 and was another shot behind in a tie for seventh with Kevin Tway, who wound up at 68, and Jonathan Randolph, who came in at 70.

First-round leader Brendan Grace of South Africa struggled to 73 and was three behind in a tie for 10th with PGA champion Jimmy Walker (69), Martin Laird (67) of Scotland, Carl Petterson (66) of Sweden, Ollie Schneiderjans (67), Aaron Baddeley (70) of Australia and Sung Kang (70) of South Korea.

Defending champion Charley Hoffman of Poway shot 71 and was tied for 47th,