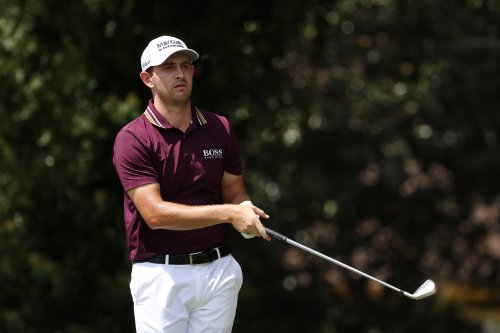 Fourth-ranked Patrick Cantlay, as leader of the FedEx Cup point standings, took a two-stroke lead into the Tour Championship and held onto it after one round, but now he has top-ranked Jon Rahm of Spain on his heels.

Cantlay, from Los Alamitos and UCLA, carded a 3-under-par 67 to lead Rahm by two after the opening day of the last of three events in the FedEx Cup playoffs and the 2020-21 PGA Tour season finale at East Lake Golf Club in Atlanta.

“The playoffs are three pretty intense, so you have to keep your energy level up and make sure you stay rested,” said Cantlay, who won an exhausting six-hole playoff over seventh-ranked Bryson DeChambeau in the BMW Championship on Monday. “It takes a couple days to get over something like that, so I just rested on Tuesday and didn’t do all that much yesterday.

“It’s too early to start thinking about what my lead is, and even in other tournaments I really don’t start looking at the leaderboard too soon, maybe until at least Saturday. I just try to stay in the moment and keep doing what I have been doing.

“I don’t want to get caught up in any other that other stuff and just want to keep playing well.”

Cantlay, who is the only player on the PGA Tour with three victories this season, made two birdies on each nine and his only bogey at No. 5, just missed a 53-foot eagle putt on the last hole before tapping in for a birdie.

Rahm, the reigning U.S. Open champion, birdied three of the first six holes before making his only bogeys on the next two, and then closed in on Cantlay with four birdies on the back nine.

“I’m not really thinking where I am on the leaderboard because I’m just trying to play the best golf possible since this golf course is so difficult,” said Rahm, who has battled Covid-19 twice this year. “It’s really a tough test and you need four good rounds to win.

“This is a very complete golf course, a great design, and you have to make sure you hit the fairways if you want to have a chance to score. The Bermuda grass makes it difficult to figure out what your golf ball is going to do at times, but this is a great venue.

“I played really good golf and make up some ground, as just want to keep chasing the leader.”

Harris English hit the shot of the day with a hole in one from 224 yards on the 15th hole and added birdies on the next two in a 66, and is five strokes back in a tie for third with DeChambeau, who birdied the last three holes for a 69.

Said English: “There’s not a lot of room up there on that green and it’s a long shot, so I just hit a 5-iron as hard as I could, just flushed it. We couldn’t see it go in the hole, but then I saw the crowd go crazy and knew what happened. I’ll take one of those any time.”

Viktor Hovland of Norway holed an incredible 128-yard shot out of the woods for an eagle on the fifth hole in a 66 and is six shots back in a tie for fifth with sixth-ranked Justin Thomas, the 2017 FedEx Cup champion, who had four birdies on the back nine in a 67, and Cameron Smith of Australia, who birdied three of the first seven holes and the last for a 68.

Kevin Na of Diamond Bar birdied three straight holes early on the back nine and then No. 18 for a 66 and is one more down in a tie for eighth with ninth-ranked Tony Finau, who managed only a 72 after entering the day second behind Cantlay.

Fifth-ranked Xander Schauffele of La Jolla and San Diego State, the Olympic Gold Medalist, shot 68 and is in a tie for 17th that includes two-time FedEx Cup winner Rory McIlroy of Northern Ireland, who also had a 68, while third-ranked Colin Morikawa, the reigning Open champion, shot 70 and is tied for 21st, and reigning Masters champion Hideki Matsuyama of Japan struggled to a 77 and is 30th and last in the field.