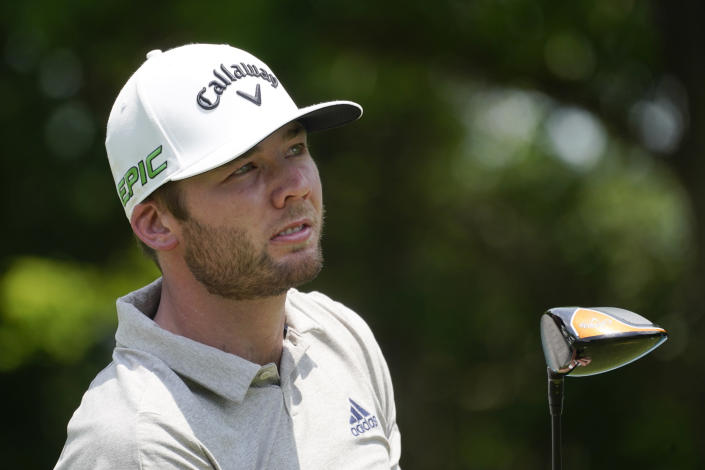 Sam Burns was being pushed all day, but managed to say in front, barely.

The 24-year-old Burns, seeking his second victory in as many starts, tapped in for a birdie on the 18th hole to cap a 3-under-par 69 and take a one-stroke lead over Kyoung-Hoon Lee of South Korea to the final round of the AT&T Byron Nelson at TPC Craig Ranch in McKinney, Texas.

“I really didn’t have my best stuff out there today, but I hung in there and 3-under is still a pretty good score,” said Burns, who claimed his first PGA Tour victory two weeks ago in the Valspar Championship. “I’m proud of the way I battled, and all-in-all, it was a solid day. The course played a little tougher today because of the wind.

“I used to think you had to play perfect golf on Sunday, but I’ve learned that’s not the case. I’m going to make mistakes, but I just have to limit them. I have to stick to my game plan and see what happens.”

Burns, who had a two-stroke lead after shooting 62 in round two, made his first bogey of the tournament on the opening hole of the third round and had another at No. 6, but made three birdies on the front nine and two more coming home to finish 54 holes at 20-under 196.

“Today was about the same as yesterday, a lot of good iron shots and putts,” said Lee, who has won four pro tournaments in Asia. “I felt comfortable out there and I’m happy with my round.

“We have 18 more holes and I never think about winning because it puts more pressure on you. I just have to play golf and we’ll see.”

Local favorite Jordan Spieth, who has never finished in the top 10 in his hometown event, sank a 31-foot eagle putt from the fringe on the 18th hole to shoot 66 and is three shots back in a tie for third with Charl Schwartzel of South Africa and Matt Kuchar, who both finished at 66, and Alex Noren of Sweden, who salvaged a 70 with a birdie on the last hole.

Spieth, who shared the first-round lead at 63, eagled No. 18 for the second time in three days.

“I was certainly lucky to have it roll up there and go in,” said Spieth, who won the Valero Texas Open and tied for third in the Masters in his last two starts. “With about four feet to go it looked good, so I raised my putter because I knew it was going to be electric. It was really a cool moment. I was kind of leaking oil coming in, so it was nice to make up for it there.

“This tournament has been tough for me because I put a lot of pressure on myself, so it’s nice to play well at home. I’m happy to be in position going to tomorrow after taking a month off. It’s nice to be playing with the crowd behind me in Dallas and I hope to feed off the atmosphere tomorrow.”

Seamus Power of Ireland holed a bunker shot from 36 yards for an eagle-2 on the 14th hole en route to a 67 and is four down in a tie for seventh with Doc Redman, who carded a bogey-free 69.

Scott Stallings collected six straight birdies through No. 10 in a 63 that was matched by Harris English, and they are one more down in a tie for ninth with Rafa Cabrera Bello of Spain (66), Bronson Burgoon (67), Ben Martin (67) and Joseph Bramlett of Saratoga and Stanford (67).

Third-ranked Jon Rahm of Spain birdied the last hole for a 68 and is tied for 34th, Masters champion Hideki Matsuyama of Japan is tied for 44th after a 68, defending champion Sung Kang of South Korea shot 72 and is tied for 56th, and fourth-ranked Bryson DeChambeau of Clovis is tied for 49th following another 72.