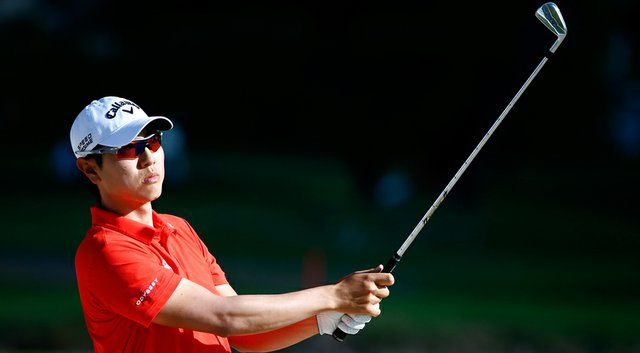 Sang-Moon Bae of South Korea recorded a bogey-free 5-under-par 66 to take a one-stroke lead over Robert Garrigus and Aaron Baddeley of Australia after two rounds of the Northern Trust Open at Riviera Country Club in Pacific Palisades.

Bae, who was tied for the lead after two rounds last year at Riviera before shooting 76 on Saturday and eventually tying for eighth, has made only one bogey in 36 holes–on the third hole while opening with a 67.

“I had really, really solid two rounds,” said Bae, who claimed his first PGA Tour victory later last season in the HP Byron Nelson Championship. “I made a lot of putts.

“I love this course. Bit hilly and greens (are) small, so (you) need really good driver and irons into the holes. Not really easy, this course is very tricky. I always aim to focus on my game and just (stay) patient.”

Baddeley, who does not have a victory since winning at Riviera in 2011, birdied the last four holes and five of the last six to shoot 65, while Garrigus, whose only PGA Tour victory came in the 2010 Children’s Miracle Network Classic, had a second straight 67 that included an eagle on the 17th hole.

Charlie Beljan, who lost to John Merrick in a playoff last year at Riviera, followed his opening 67 with a 68 and was alone in fourth, two shots behind.

First-round leader Dustin Johnson followed his opening 66 with a 70 and was tied for fifth with Jim Furyk, who had a second consecutive 68, William McGirt, who shot 67, and Brian Harman, who came in at 69.