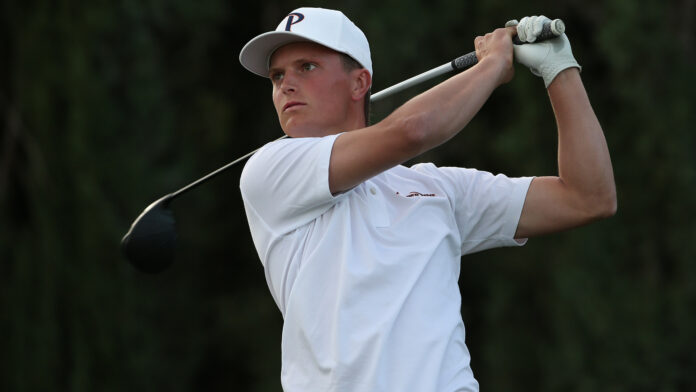 Defending national champion Pepperdine’s bid for a second straight title ended when host Arizona State dealt the Waves a 4-1 defeat in the semifinals of match play in the NCAA Men’s Golf Championships at Grayhawk Golf Club in Scottsdale, Ariz.

Earlier in the day, the sixth-seeded Waves beat third-seeded North Carolina, 3-2 in the quarterfinals.

William Mouw (pictured), a junior from Chino, gave Pepperdine its only victory in the semifinals by downing James Leow, 3 and 2.

“I’m just so proud of our guys and how hard they fought,” Pepperdine Coach Michael Beard said “When they were down, they found a way to get back. We didn’t win today but it was close and sometimes the score doesn’t do it justice. I can’t say enough about this team.

“It’s a unique, special group that I’ve been so thankful to be a part of. This group’s never been defending national champs before and we were able to tackle all that and absorb some of the stuff that we had going on. To be able to come in and make such a good run here — to make match play alone is an accomplishment, and then to win the first match, we played great today.

“I’m so glad I got to be a part of this whole thing with these guys and it’s something we’ll never forget.”

Arizona State will face top-seeded Vanderbilt, a 3-2 winner over fourth-seeded Texas in the semifinals, for the national championship.

Pepperdine defeated North Carolina, 3-2, in the quarterfinals earlier in the day as Menante beat Ryan Burnett on the 19th hole, Vrzich got past Peter Fountain, 2 and 1, and Hitchner downed Ryan Gerard, also by 2 and 1.

David Ford slipped past Highsmith on the last hole, 1 up, and Austin Greaser took down Mouw, 2 and 1.