An shoots 65, leads Laird by 1 in Phoenix Open 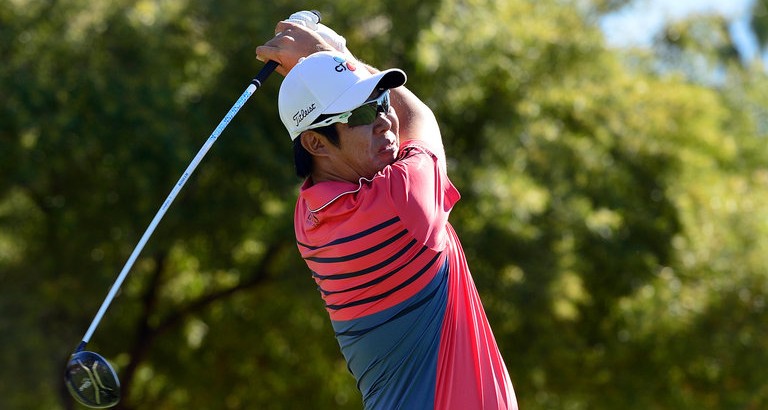 Byeong Hun An must love a crowd.

As the Waste Management Phoenix Open drew an estimated 204,906 fans on Saturday, a record for a golf event, the 25-year-old South Korean shot a bogey-free, 6-under-par 65 to take a one-stroke lead over Martin Laird of Scotland after three rounds at TPC Scottsdale.

“It’s crazy … insane,” said An, the 2009 U.S. Amateur champion, of the crowd on the stadium-like par-3 16th hole. “It’s pretty cool. I’d never seen people like this. I think it’s fun as long as nobody yells at my downswing.

“My goal (in the final round) is to play bogey free and play smart. … Bogey free and shooting 6-under (on Saturday), you can’t do better than that. I like desert golf courses. If you miss, you are in the desert and you can still play your shots.

“You hit drivers and try to carry the bunkers. The yardages fit me nicely. Everything just suits my game and this course.”

The third-round crowd bested the 201,003 set on Saturday of last year’s tournament, the first time any golf event cracked 200,000 for a day.

Laird was flawless after his only bogey on the second hole, following that with four straight birdies and added three birdies on the back nine in another 65.

John Peterson, the 2011 NCAA champion from LSU, eagled the 13th hole in a round of 63 and was three shots behind in a tie for third with defending champion Hideki Matsuyama of Japan, who recorded a second straight 68, Michael Kim of Alameda and Cal, who totaled 66, and Graham DeLaet (65) of Canada.

Matt Kuchar, the first-round leader, carded a second straight 69 and was another shot back in a tie for seventh with Marc Leishman (65) of Australia, William McGirt (66), J.J. Spaun (67) and Brendan Steele (70) of Murietta and UC Riverside, who was tied for the lead with An after two rounds.

Crowd favorite Phil Mickelson, who played nearby at Arizona State and has won the Phoenix Open three times, posted a 65 and is six shots back in a tie for 12th.

Jon Rahm, last week’s winner in San Diego, shot a 65, including a 6-under 30 after starting on the back nine, and was another stroke behind in a tie for 17th that included Rickie Fowler of Murrieta, who had a 69.

Sixth-ranked Jordan Spieth was eight back in a tie for 21st after a 67.