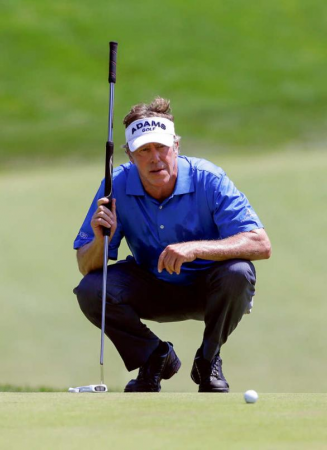 Michael Allen recovered from a slow start and birdied the last two holes to shoot 3-under-par 69, good for a one-stroke lead over Scott Dunlap and Chien Soon Lu of Taiwan heading into the final round of the Allianz Championship on the Old Course at Broken Sound in Boca Raton, Fla.

Allen, who tied the Champions Tour record of 60 the previous day, was 1-over through 10 holes before carding birdies on four of the last eight holes, starting with two in a row at Nos. 11 and 12.

“I kind of hung in there, but I still felt comfortable with what I was doing out there,” said Allen, from San Mateo and University of Nevada Reno, who is looking for his sixth victory on the senior circuit.

“It’s hard (coming off a low round), but I felt I was still playing well. I knew that if I could hang tough that things would eventually come around.”

Dunlap, playing in his second Champions Tour event, is bogey-free through 36 holes after following an opening 63 with a 67, while Lu, who has won 14 times in Asia, recorded his second straight 65.

Duffy Waldorf, seeking his first victory on the senior circuit, had the low round of the day and was two strokes back in fourth after a 63.

Jay Haas posted a 64 and was three strokes behind in a tie for fifth with Tom Lehman, who came in with a bogey-free 67.