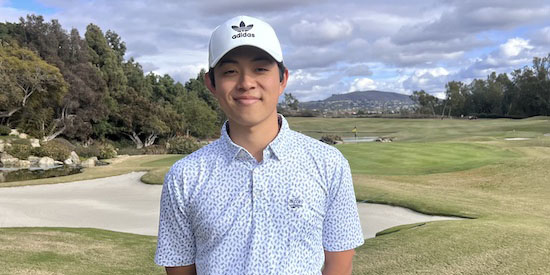 Kento Yamawaki of Encinitas rolled to a four-stroke victory over defending Ben Soicher of Mill Valley and Elliott Bunyaviroch of San Francisco in the AmateurGolf.com San Diego Amateur Championship at Aviara Golf Club in Carlsbad.

Yamawaki, who played at La Costa Canyon High and Cal, warmed up for his bid to qualify for the PGA Tour Canada by posting a score of 69-71—140, 4-under-par, while Soicher finished at 75-69—144 and Bunyaviroch wound up at 74-70—144 by making three birdies on the last four holes.

Nursing a one-stroke lead coming down the stretch, Yamawaki made birdies on Nos. 16 and 17 before closing with a solid par to wrap up the victory.

Jim Plotkin of Carlsbad claimed the Senior Division title with a par on the third playoff hole to beat Brian Smyth of North Tustin, who was playing in his first event since turning 50 but hit his tee shot into a hazard on that third extra hole and made a bogey.