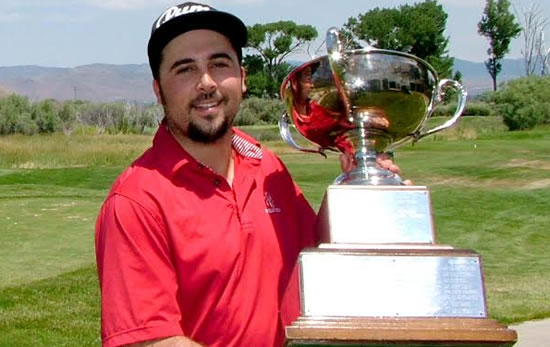 Daren Johnson probably is a little sad to see 2022 coming to an end.

Johnson, who is from Covina and Holy Names University in Oakland, claimed his third title of the year by three points over Josh Goldstein of Las Vegas under the Modified Stableford scoring system in the Southern Nevada Winter Classic at Cascata Golf Club in Boulder City, Nev.

“I wish we weren’t going into the offseason because I’m playing much better at the end of the year,” said Johnson, whose stroke-play score was 72-79—151. “But in 2023, I’ll definitely stick to the game plan which is not being so hard on myself. I know I’m going to make mistakes but at the same time I want to maximize my scoring opportunities.”

Johnson, who also won the Southern Nevada Tour Championship early in December and the Southern Nevada Golf Association Tour Stableford Championship at Coyote Springs in September, posted a Stableford score of 22-11—33, while Goldstein, the 2021 Nevada State Amateur champion from Las Vegas, was second at 17-13—30, followed by Scott Lytle of Las Vegas at 16-13—29, Andrew Hawk of Henderson, Nev., at 16-12—28, and Kevin McEvoy of Las Vegas  at 16-9—25.

Jed Shreve of The Woodlands, Texas, shot 18-12—30 to tie for the Senior Division title with Todd Roberts of Las Vegas, who also wound up at 18-12—30, but Shreve claimed the title in a card-off.