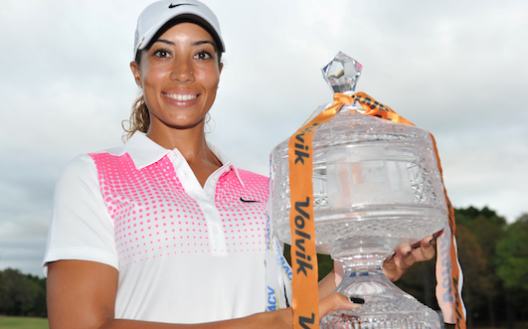 Lee, who captured the last two Australian Women’s Amateur Championships and the 2012 U.S. Girls’ Junior title, birdied three consecutive holes through No. 8 to pull even with Woods and also finished with a 69.

However, Woods took the lead for good with a birdie on the ninth hole and added three more on the back nine to claim her second victory as a professional, taking advantage of her length as all four came on par-5 holes.

“This is a huge accomplishment for me,” said Woods, niece of Tiger Woods, whose first pro title came in a SunCoast Ladies Series event at LPGA International Golf Club in Daytona Beach, Fla., in 2012 after she graduated from Wake Forest.

“The Ladies European Tour has been great to be able to play this last year. I’ve been able to see all of these great players, play with Solheim Cup members, so I’ve learned so much from all of these girls, and to be able to come out here and actually compete with them and come out on top was huge for me.

“It’s not necessarily a shock, but I missed the cut last week by two shots in New Zealand … but I came into this week with a new mindset. I worked on a few things and everything just clicked. After the first round I knew I could win, so from then on that was the goal.”

Camilla Lennarth of Sweden shot 70 to tie for third with Stacy Lee Bregman of South Africa, who had a 72.

First-round leader Jessica Korda, coming off a victory in the Pure Silk-Bahamas LPGA Classic, bounced back from rounds of 73-74 with a 69 and wound up in a tie for eighth, while Yani Tseng, the former No. 1 player in the world, tied for 10th after a 66.