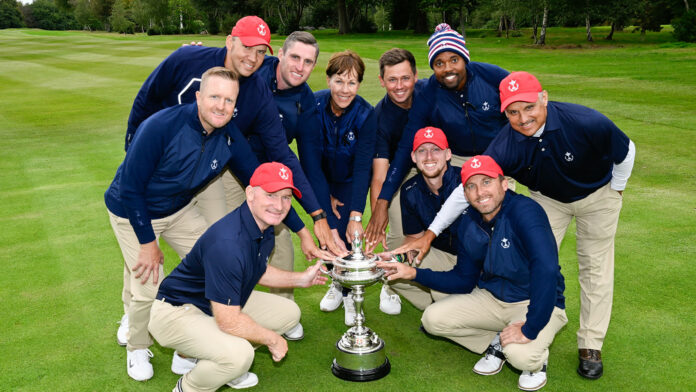 Michael Block of Mission Viejo posted a 4-1 record to lead the United States to a 15.5-10.5 victory over Great Britain and Ireland in the 30th PGA Cup at Foxhills Resort & Club in Surrey, England.

“I have been able to do a lot of amazing things in my career, and this ranks right at the very top,” Whaley said after the Americans captured their first overseas victory in the series since 2009 and claimed the Llandudno International Trophy for the 19th time while taking a 19-7-4 lead in the event that was first played in 1973.

“(Block) really set the tone for everybody else. He fought so hard, and he earned us that first point (in singles). That first point is so crucial for the rest of the team. I have never seen anyone fight so hard for a point.

“It started to get a little dicey, but in the end, we got it done.”

Block, who helped the U.S. build a 9.5-6.5 lead heading to the final day, was in deep trouble during the opening singles match.

Ashley Mansell of England raced out to a seemingly insurmountable 4-up lead after 12 holes over Block, who incredibly birdied five of the six last holes thanks to lengthy birdie putts on Nos. 15 and 17 before two-putting for a birdie on the last hole to win the match, 1 up.

“This team has something special,” said Block, the 2014 PGA Professional champion, who is head pro at Arroyo Trabuco Golf Cub in Mission Viejo and recently shot a course-record a 14-under-par 58 on the North Course at Coto de Caza Golf & Racquet Club. “It was really fun doing this in front of Suzy.”

Omar Uresti of Austin, Texas, a PGA Life Member and two-time winner on the PGA Tour, provided the clinching point for the United States with a 4-and-3 victory over Simon Lilly of England.

“It means a lot,” Uresti said. “It feels great to finally come over here and win. As they say, ‘Third times a charm.’ I am a little bit more emotional than I expected …. Excitement, joy, almost tearful joy.”

Following two matches that ended in ties and secured a half-point for both squads, Ryan Vermeer, the 2018 PGA Professional champion and PGA Director of Instruction at Happy Hollow Club in Omaha, Neb., earned a 4-and-3 victory over Simon Thornton of Ireland.

However, Great Britain and Ireland won three straight matches to close the gap to 12.5-10.5.

Adam Keogh of England knocked off Frank Bensel Jr. of Jupiter, Fla., 2 and 1, Daniel Whitby-Smith of England followed with a 3-and-2 victory over Wyatt Worthington II, and Greig Hutcheon of Scotland would add another win over Jared Jones of Houston, 4 and 3, to make it close.

Suddenly, it was a two-point margin, with three matches still in progress.

Then Uresti’s victory wrapped things up for Whaley and the Americans.