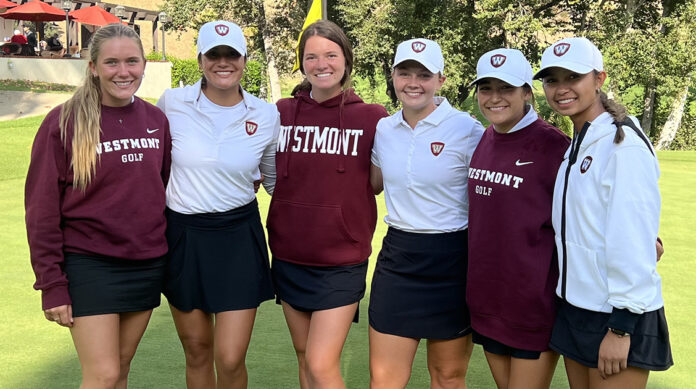 Westmont College of Santa Barbara placed three golfers in the top 10 and beat Menlo College in a playoff to capture the TMU Danish Classic on the Red and White Courses at Alisal Guest Ranch and Resort in Solvang.

Westmont’s five players recorded a score 12 on the par-3 18th hole in the playoff with four pars and one score that was discarded, while Menlo had three bogeys and a par that counted for a total of 15.

“It feels great to get the tournament win,” said Westmont Coach Josh Ault, whose Warriors have finished in the top four three times during the Fall Season. “We were leading by nine strokes going into round two today. Our women shot one stroke better as a team today, but Menlo played great and fought all the way back. We had been ahead the whole day, but Menlo tied it up. On the final hole, we had to make a two-footer to keep it tied and put us into the playoff.”

“In the playoff, all five women from the two teams go back to hole 18 and we take the best four of the five scores. All five of our players hit the green in regulation. It was a clutch, convincing victory. They wanted it and they earned it. They were very excited and there were lots of smiles.”

“I’m really proud of the way our players competed,” Menlo Coach Mike Givens said. “We had fog on one side of us and smoke on the other, but everyone stayed focused.”

Westmont will close out the Fall Season on Oct. 31-Nov. 1 in the PCH Invitational hosted by Menlo at Quail Lodge in Carmel.

Share
Facebook
Twitter
Pinterest
WhatsApp
Previous article
Fowler Birdies No. 18, Leads Bradley By One Stroke After Third Round of Zozo
Next article
Bradley Earns First Win in Four Years By One Shot Over Fowler, Putnam in Zozo