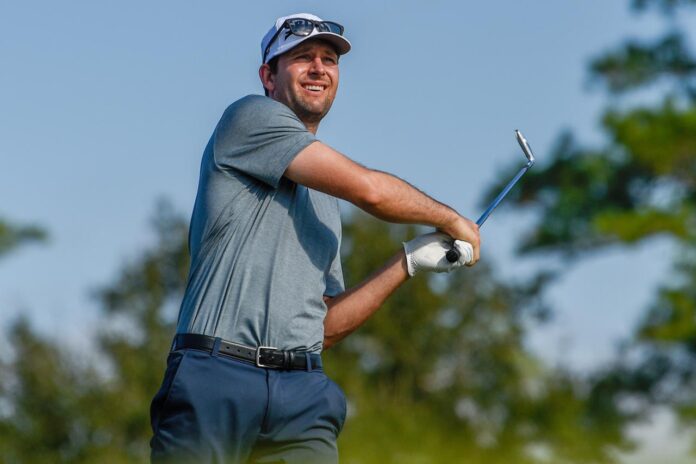 Martin Trainer won the 2019 Puerto Rico Open on the PGA Tour, but since then hasn’t done much, until now.

The 30-year-old Trainer, from Palo Alto and USC, carded a second straight 5-under-par 65 to take a one-stroke lead over Kevin Tway in the second round of the Hewlett Packard Enterprise Houston Open at Memorial Park Golf Course in Houston.

Play was halted by darkness for the second straight day after the tournament fell behind schedule because of a 2½-hour rain delay in round one, and 66 players will return on Saturday morning to finish the second round. After the cut is made, round three will begin and things should be back on track in the 74th edition of the Houston Open.

“Last week I hit the ball really well for the first time in a long time and I just didn’t putt very well,” said Trainer, who has missed the cut in all six of his tournaments this season and 17 of 18 overall. “So I figured if I could somehow do both those at the same time—to be fair, every single player says that every single week.

“But for me, it had been such a long time coming. It really was a grind for a long time. So now to finally be able to put it together … you have to hope that this is the week. It is demoralizing when you keep missing cuts over and over again. It’s been tough at times for me the last couple years not playing well, but now that I figured out a little bit of ball-striking, dropped some putts, it really can turn around that quickly.

“So I’m just grateful that this is happening to me this week and hopefully I’ll keep it going.”

Trainer, who won twice on what is now the 2018 Korn Ferry Tour and also captured the 2016 Mazatlan Open on the PGA Tour Latinoamerica, made three birdies after starting on the back nine and added two on the front to cap a bogey-free 65 and play 36 holes at 10-under 130.

Tway, who also has only one PGA Tour victory, sank a 61-foot chip shot for an eagle at No. 3 and holed out from 107 yards at No. 13 for another eagle on his way to a 64, while Jason Kokrak was 6-under for the day after 11 holes following an opening 68 and was two shots back in third, followed by Adam Long, who birdied three of his last five holes for a 67.

“You’re never going to complain about a 64 with a couple hole‑outs,” said Tway, who played 27 holes on Friday because of the first-round rain delay. “It’s amazing to make two eagles in a round. I played very well, putted well. I’m a little tired now, but all in all a good day,”

Matthew NeSmith had three straight birdies on the back nine and is five strokes behind in a tie for eighth with Max McGreevy, who made two late birdies in another 67, and Wyndham Clark, who made only one bogey in a 69.

Marc Leishman of Australia, the first- round co-leader with a 65, was 1-over through 11 holes and in a tie for 14th that included Matthew Wolff of Agoura Hills, who sank a seven-foot eagle put at No. 3 right and was and was 2-under after 12 before the end came after starting on the front nine after opening with a 68.

Defending champion Carlos Ortiz was forced to withdraw before the tournament because of left shoulder injury.