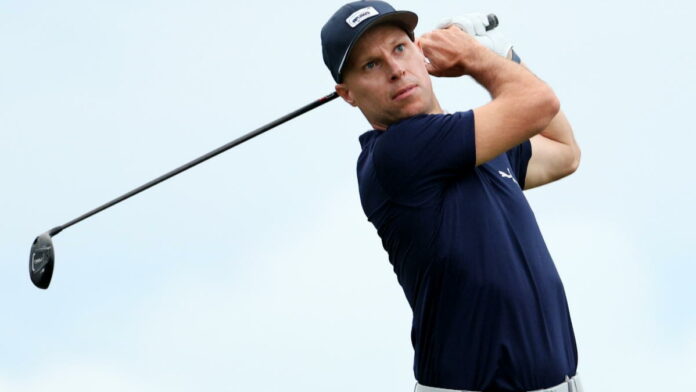 Ben Crane hasn’t won on the PGA Tour since 2014, but he’s halfway to doing it again.

The 46-year-old Crane posted a score of 9-under-par 62 in windy and rain conditions to take a one-stroke lead over Adam Schenk, Aaron Baddeley of Australia, Robby Shelton, Ben Griffin and Austin Smotherman through 36 holes of the Butterfield Bermuda Classic at Port Royal Golf Course in Southampton, Bermuda.

“I mean, I couldn’t be more encouraged,” said Crane, who is playing this week on a sponsor’s exemption.  “Obviously, I played the best golf I’ve played in a long time and to be in this tournament is super encouraging, to get to play four rounds.

“I mean, it sounds crazy, but I scored is what I did exceptionally. By that, on holes I made a long putt, I did not hit it well off the tee on the first nine. On the second nine, I started to get my swing going so I was hitting quality shots, hit a few balls close to the hole. And, you know, making those 10-footers, made a couple of 30-footers, holed a shot from the fairway.

“So often in golf, you get beat up. You don’t have a teammate to fall back on, it’s an individual game and it’s just one little slipped shot here or there and you lose your confidence. It’s just a really, really hard game. I said it to my son who’s 14 and learning to play the game, it’s a really hard game, golf’s hard. Today was one of those special days, one of a hundred whatever it is where it just kind of all comes together.”

Crane, whose victory in the 2014 FedEx St. Jude Classic was his fifth on the PGA Tour, eagled the sixth hole while adding nine birdies against two bogeys en route to recording a 36-hole score of 14-under 128.

Smotherman, who shared the first round lead at 62, birdied four of his first seven holes in a 67; Baddeley, a Monday qualifier, collected eight birdies in a 64; Schenk holed out for eagle at No. 7 in a 66; Griffin eagled the 12th hole in a 64, while Shelton also sank a shot from the fairway for an eagle on the seventh hole in a 66.

“I just wanted to make sure I could be here this week,” said Baddeley, 41, who claimed the last of his four PGA Tour victories in the 2016 Barbasol Championship. “I’d say this summer I hit the ball consistently, probably the most consistent I’ve ever done in my career, and just didn’t make enough putts.

“I’ve got the putting figured out again now and just sort of feel like everything’s sort of turning the corner. I feel like the confidence is back, so it’s just a matter of just getting some starts and going out and playing.”

Said Smotherman: “It was more difficult than yesterday, but I mean, I’m very pleased with where we finished up. When conditions are like this, you cannot think technical thoughts at all. The wind is blowing your putter around, you’ve just got to figure out how to find the center of the face, start it on-line and hopefully got the right speed.”

Seamus Power made seven birdies in a second straight 65 and is two shots behind in a tie for seventh with Nico Echavarria of Colombia, who carded a bogey-free 64; Zecheng Doug of China, who made five birdies after starting on the back nine on his way to a second 65; Kevin Yu of Taiwan, who made two late birdies in a 66, and Dylan Wu, who had three birdies on each nine in another 66.