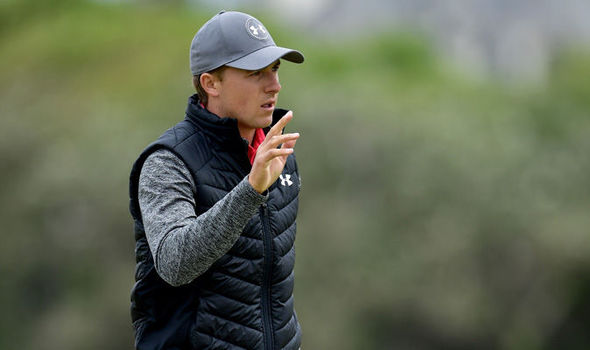 Jordan Spieth and U.S. Open champion Brooks Koepka made hay during the morning wave despite some wind and rain at Royal Birkdale, while Matt Kuchar took advantage of improved conditions in the afternoon.

Spieth, Koepka and Kuchar posted 5-under-par 65s and share the lead after one round of the 146th Open Championship in Southport, England.

“Everything was strong,” said the third-ranked Spieth (pictured), who hopes to add the Open to the Masters and U.S. Open titles he won in 2015. “I still missed tee shots, a couple more than I really wanted to. And I had a couple of putts that were within 10, 12 feet that missed, but it was really, really solid all around.

“It’s a gettable golf course if you’re controlling your ball off the tee. You’re able to hit the ball in the middle of greens and they aren’t too severe, so you actually have birdie putts from the center of greens, even if you’re out of position. … Stole one at No. 2 and started to get it going around the turn.

“It was a really good start. Tomorrow is going to be a very different type of day if (the weather that’s) forecasted comes in.”

Koepka was playing for the first time since he claimed his initial major title last month in the U.S. Open at Erin Hills, but showed no signs of rust.

After collecting four birdies and his only bogey on the difficult 16th hole, he grabbed his share of the lead by holing a bunker shot for eagle at No. 17.

“I’m mentally recharged,” said Koepka, who hit only 9 of 18 greens in regulation but needed only 21 putts. “I’ve done the same thing for years (with my swing), so it shouldn’t take too long to get back into it.

Kuchar, whose 13 pro victories do not include a major, was threatening the record of 63 in the Grand Slam events when he played the front nine in 5-under 29.

Then he finished with nine consecutive pars.

“The back side I stayed incredibly aggressive, particularly off the tee,” said Kuchar, whose only top-10 finish in the Open was a tie for ninth in 2012 at Royal Lytham & St. Annes. “I had a couple of opportunities that I wasn’t able to convert, but sitting here at 5 under par, I’m awfully pleased.

“ … I absolutely love this golf course. I had forgotten how good a course Royal Birkdale is. It’s a tremendous golf course.”

Paul Casey of England made two late birdies in a 66 and is tied for fourth with Charl Schwartzel of South Africa, who birdied the last two holes.

Rafa Cabrera-Bello of Spain, who won the Scottish Open last week, carded a 67 and is tied for sixth with Ian Poulter of England, Charley Hoffman, Richard Bland of England, Justin Thomas and Austin Connelly of Canada.

Ernie Els of South Africa, a two-time Open champ, recorded a 68 and is in a tie for 12th that includes second-ranked Hideki Matsuyama of Japan, James Hahn of Alameda and Cal, two-time Masters champion Bubba Watson, ninth-ranked Alex Noren of Sweden and Kevin Na of Diamond Bar.

Defending champion Henrik Stenson of Sweden shot 69 and is in a tie for 26th that includes sixth-ranked Jason Day of Australia, seventh-ranked Jon Rahm of Spain, Xander Schauffele of San Diego and Adam Scott of Australia.

Top-ranked Dustin Johnson finished at 71 and is in a tie for 58th that includes fourth-ranked Rory McIlroy of Northern Ireland, 10th-ranked Rickie Fowler of Murrieta, Jamie Lovemark of Rancho Santa Fe and USC, and Justin Rose of England.

Sergio Garcia of Spain, the Masters champion who is ranked fifth, stumbled to a 73 and is tied for 90th along with five-time major champion Phil Mickelson and Padraig Harrington of Ireland, who won the 2008 Open at Royal Birkdal