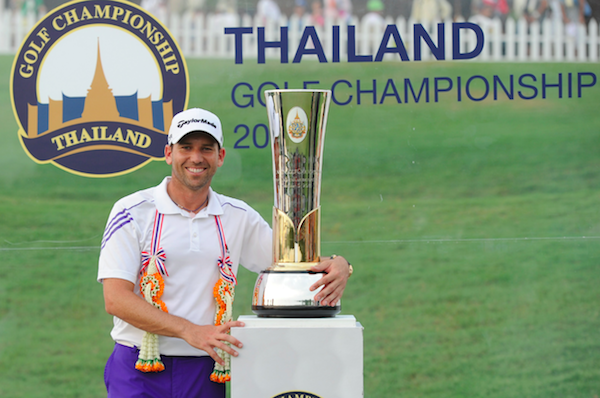 Sergio Garcia won for the first time in a year, shooting 4-under-par 68 in the final round to claim a four-stroke victory over Henrik Stenson of Sweden in the Thailand Golf Championship at Amata Spring Country Club in Bangkok.

The 33-year-old Spaniard collected the 26th victory of his career and fourth on the Asian Tour, and the first since he captured the Iskandar Johor Championship in Malaysia last December.

“It was great, an amazing week,” said Garcia, who won with his girlfriend, Katharina Boehm as his caddie. “I’m very, very happy and I can’t wait to go back home to Switzerland and kind of sleep on it a little bit.

“I knew Henrik was going to make it difficult for me. He’s been playing so amazingly great, and he did. I started well, but he also did. He kept hitting good shot after good shot.”

Stenson, who made history this year by becoming the first player to win the FedEx Cup and the Race to Dubai, also closed with a 68 and put pressure on Garcia by making three birdies on the first five holes. He was three shots back before making his only bogey of the day on the 17th hole.

Alexander Levy of France was fourth, eight strokes back, after a 69.

Justin Rose of England, still winless since U.S. Open in June, finished with a 72 to tie for fifth with Charl Schwartzel of South Africa, who came in at 67, Anirban Lahiri of India, who shot 73, and Yuki Kono of Japan, who had a 69.

Rickie Fowler shot 70 and led the American contingent in a tie for eighth, while Hunter Mahan tied for 13th after a 68.