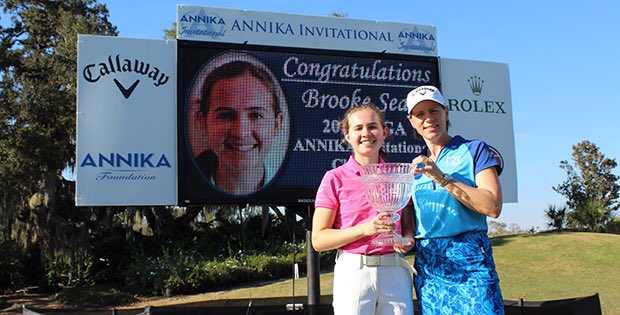 Brooke Seay of Rancho Santa Fe sank a 30-foot birdie putt on the second playoff hole to beat Amanda Linner of Sweden and win the Annika Girls Invitational on the Watson Course at Reunion Resort in Kissimmee, Fla.

Linner finished birdie-eagle to set a tournament record of 8-under-par 64 and catch Seay, who started her round of 70 with three straight birdies. Both made par on the first extra hole before Seay knocked in the winner after Linner missed a 20-foot birdie attempt.

“I think the pressure helps me just focus more,” said Seay, who lost the 2016 CIF San Diego Girls Championship in a seven-hole playoff. “I definitely get nervous, and sometimes I feel tense or a little shaky, but I think that it just makes me focus in on my target more and I tend to do well.”