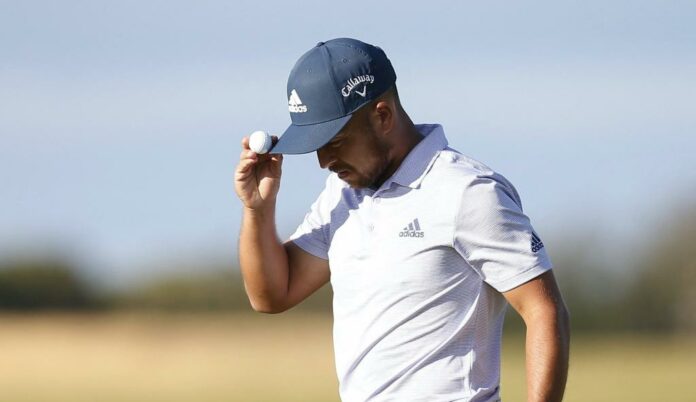 Xander Schauffele stumbled on the last two holes, but still finds himself atop the leaderboard.

Schauffele, who made his only two bogeys on the 17th and 18th holes, still posted a 4-under-par 66 to take a two-stroke lead over Rafa Cabrera Bello of Spain heading to the final round of the 40th Genesis Scottish Open in the wind at The Renaissance Club in North Berwick, Scotland.

The tournament is co-sanctioned by the DP World Tour and the PGA Tour ahead of the 150th Open Championship next week about 85 miles down the road on the famed Old Course at St. Andrews.

“It’s just links golf and you just never know what’s going to happen,” said Schauffele, the 2021 Olympic Gold Medalist who claimed his sixth PGA Tour victory by winning the Travelers Championship in his last start. “You can’t watch the leaderboard and just have to stick with the process and take it one shot at a time.

“It’s tough putting in the wind and you know you’re going to get some bad bounces. You have to figure out the speed of the greens and putt better than anyone else to win. Also, it’s a scrambling test and you have to chip the ball close to the hole.

“I had pretty much everything going, but it was a tough finish.”

Schauffele, from La Jolla and San Diego State who also won the two-day JP McManus Charity Pro-Am on Tuesday, made four of his six birdies on the back nine before the two bogeys left him with a 54-hole score of 7-under 203.

Cabrera Bello, who has won seven times as a pro including the 2017 Scottish Open, sank an 11-foot eagle putt on the 10th hole followed by birdies on the next three holes on his way to a 67, his third straight round under 70.

“I’ve been lucky enough to have won this before. And why not the Home of Golf, the country where golf was invented playing links and with beautiful, sunny and windy conditions. It just makes it even more fun.

“The bunker shot on 17 was beautiful and the tricky chip shot on 18 too. Many times, we finish with a bitter taste. This course can do that to you, because 17 and 18 are not easy holes. To be able to save par the way I did, dinner is going to taste sweeter.”

For Jordan Spieth, it wasn’t about pars, but eagles.

Spieth made a six-foot eagle putt at No. 10 and holed his second shot for another eagle at No. 15 while shooting 66 and is three shots behind in a tie for third with Ryan Palmer, who had four birdies and his lone bogey on the last hole in a 67, and Jordan Smith of England, who had four birdies on the back nine in a 69.

“I just wanted to finish the back nine under par to stay in the tournament and two eagles will do that,” said Spieth, who earned his 13th PGA Tour victory by winning the RBC Heritage in April. I just tried to stay patient and hit good shots, and was able to do that. Again, a couple of eagles makes that easier.

“Links golf is arguably my favorite kind of golf.”

Cameron Tringale of Mission Viejo, who led by three strokes after each of the first two rounds, started fast by sinking a 14-foot eagle putt on the third hole but didn’t make a birdie while struggling to a 74 and is four down in a tie for sixth with Alex Smalley, who collected six birdies in a 67, and U.S. Open champion Matt Fitzpatrick of England, who made a 26-foot eagle putt on the 16th hole of his 70.

Max Homa of Valencia and Cal holed out from 95 yards for an eagle on the third hole en route to a bogey-free 66 and is five strokes behind in a big tie for ninth with Kurt Kitayama of Chico and UNLV (71), 2019 U.S. Open champion Gary Woodland (72), Joaquin Niemann of Chile (70), Branden Grace of South Africa (67), Rasmus Hojgaard of Denmark (70), Joohyung Kim of South Korea (69) and Alexander Bjork of Denmark (67).

Seventh-ranked Patrick Cantlay of Los Alamitos and UCLA is tied for 17th after a 69, sixth-ranked Cameron Smith of Australia shot 68 and is tied for 28th, while ninth-seeded Sam Burns made a double-bogey 5 at No. 17 in a 71 and is in a tie for 53rd that includes third-ranked Jon Rahm of Spain, who struggled to a 74.