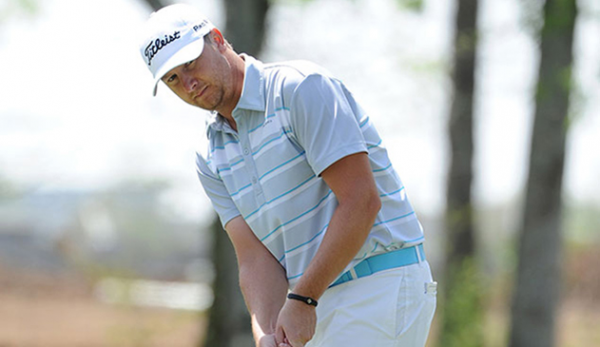 Brice Garnett, a PGA Tour rookie, eagled the first hole to kick-start a 4-under-par 66 and held a one-stroke lead over Chris Stroud and Robert Streb midway through the Crowne Plaza Invitational at Colonial Country Club in Fort Worth, Texas.

The 30-year-old Garnett, whose only two pro victories came on the 2011 eGolf Tour, followed an opening 67 with a round that included a 17-foot eagle putt on No. 1, three birdies and a lone bogey at No. 3.

“I’m just keeping my head down and trying to make as many birdies as possible,” said Garnett, whose best finish this season is a tie for seventh in the Shell Houston Open. “I’m going to try to embrace it this weekend and have fun, and we’ll see where we stand come Sunday.

“I think each and every week the rookies feel more comfortable. I know I have. You can’t get down on yourself being a rookie. … It’s been fun, and I’m learning each and every day.”

Stroud, whose best finish on the PGA Tour came when he lost a playoff to Ken Duke in the 2013 Travelers Championship, recorded eight birdies in a round of 64, while Streb, who won the 2012 Mylan Classic on the Web.com Tour, followed a 66 with a 68 that included one bogey, on the fourth hole.

Dustin Johnson who held the first-round lead with a 65, shot 70 and was two shots back in a tie for fourth with six others.

Included in that tie were four-time PGA Tour winner Chad Campbell, who had a 66, Aaron Baddeley of Australia, who finished at 67, Bo Van Pelt, who shot 68, FedEx Cup leader Jimmy Walker, who wound up at 68, Brian Davis of England, who totaled 67, and Tim Clark of South Africa, who came in with a 68.

PGA champion Jason Dufner recorded a 69 and was in a tie for 11th that included Brandt Snedeker, who had a 66, and Jordan Spieth, who carded a 69.

Adam Scott, playing as the No. 1 player in the World Golf Rankings for the first time, shot 68 and was tied for 38th, while Matt Kuchar totaled 72-70–142 to miss the cut by one stroke.