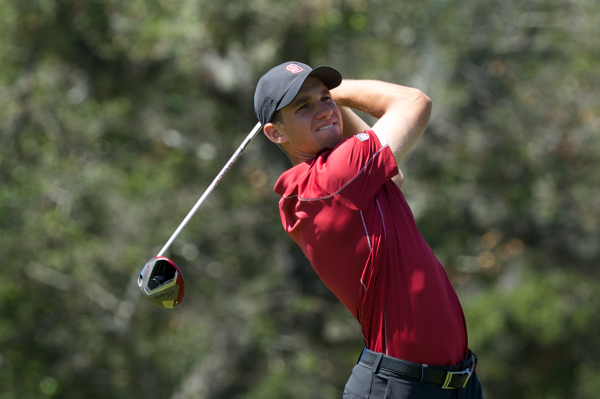 Patrick Rodgers claimed his first professional victory by sinking an eight-foot birdie putt on the second playoff hole to turn back Steve Marino in the rain-plagued Colombia Championship on the Web.com Tour at Bogota Country Club in Bogota, Colombia.

The 22-year-old Rodgers, an All-American at Stanford who last year tied Tiger Woods’ school record with 11 career victories, closed with a 6-under 65 that included birdies on two of the last three holes of regulation to tie Marino, who birdied the last hole for a 69.

“This is huge,” said Rodgers, who was making his seventh start on the Web.com Tour. “I’ve already had so many ups-and-downs in my pro career. To be out here and win so early is a dream come true. I’m really excited for the rest of the season.

“I didn’t even know if we’d get in 72 holes and that’s a huge credit to the entire tournament staff. I loved this course from the start. It’s such a great test of golf.”

Andrew Yun, who graduated from Stanford in 2013, closed with a 65 and tied for third, two strokes back, with Chase Wright, who finished with a 69 despite making a double-bogey 6 on the first hole.