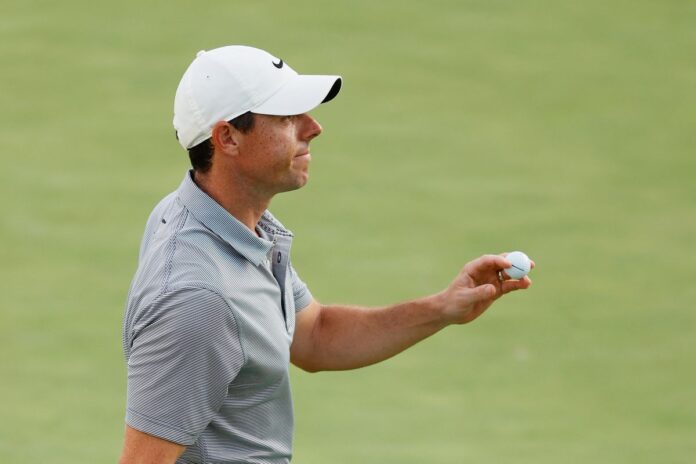 Top-ranked Jon Rahm of Spain bounced back after letting what looked like a certain victory slip way in The Northern Trust, first event of the FedEx Cup playoffs, on Monday.

Rahm shot a bogey-free, 8-under-par 64 in hot and humid conditions to tie for the lead with Rory McIlroy (pictured) of Northern Ireland and Sam Burns after the first round of the BMW Championship at Caves Valley Golf Club in Owings Mills, Md.

“I played great golf last week, just a couple bad swings down the stretch, and that’s the most important thing to remember,” said Rahm, the reigning U.S. Open champion who beat Dustin Johnson in a playoff to win the BMW last year,

“I’m just always trying to get better. That’s all I can say. I think the bigger thing has been the putter. I found a putter that really works for me that I’m comfortable with. I would say ball striking is probably not that different, but my putting stats are guaranteed to be a lot better, and that’s the key difference.

“It was not easy to walk this course today because it was so hot and humid. You just had to stay hydrated.”

Rahm, who tied for third in The Northern Trust after his second battle with Covid-19 this year, birdied five of the first eight holes and added three more birdies coming home in his flawless round.

McIlroy, who won the Wells Fargo Championship in what for him has been a so-so year, sank an 11-foot eagle putt at No. 16 to highlight his round, which included seven birdies and one bogey, while Burns collected four birdies on each nine in his bogey-free round.

“I kind of like playing a course we haven’t played before because maybe we can pick up something different about the course that other players didn’t,” said Burns, who claimed his first PGA Tour victory this year in the Valspar Championship. “These are big greens with a lot of slope and if you get in the wrong spots you can have a 20-foot putt with six feet of break, which is difficult to manage. I think I did a good job today of not putting the ball in the wrong places on the greens.”

“I was calm and felt very prepared, which helps when you’re standing over those putts. Once they start dropping it makes it easier on the next one and the next one. But mostly I think having a good game plan made all the difference.

“Well, yeah, obviously I wish I could shoot 64 every day, but that just doesn’t happen.”

Said McIlroy, who captured the FedEx Cup in 2016 and 2019: “Every day you got out there and play your best, but some days are better than others, and obviously this was one of those. There were a lot of positive signs out there, better than the last few weeks, and I just have to keep it going.

“I got under par early and built some momentum, then just kept going. I got a new 3-wood and hit my two best shots of the day with it, one to set up that eagle.”

Second-ranked Dustin Johnson, the defending FedEx Cup champion, made three birdies on each nine in a 67 and is in a huge tie for seventh with fourth-ranked Xander Schauffele and Harold Varner III, who both had three birdies on each nine, Webb Simpson, who sank a 13-foot eagle putt from the fringe on No. 5, Keegan Bradley and  ninth-ranked Tony Finau, who started the tournament as the FedEx Cup points leader after winning the Northern Trust.

Fifth-ranked Justin Thomas shot 68 and is in a tie for 19th that includes sixth-ranked Bryson DeChambeau of Clovis, while eight-ranked Brooks Koepka is tied for 43rd at 70, seventh-ranked Louis Oosthuizen is tied for 47 at 71, and third-ranked Collin Morikawa of La Canada-Flintridge and Cal is tied for 57th at 72.

The top 70 players in the FedEx Cup standings qualified for the BMW Championship, although Patrick Reed was forced to withdraw because he has pneumonia, and only the top 30 after the BMW will qualify for the Tour Championship next week at East Lake Golf Club in Atlanta.