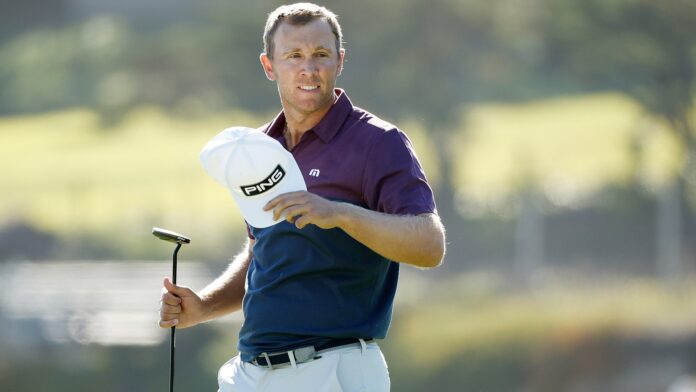 Seamus Power of Ireland turned it on for the second straight day.

The 34-year-old Power shot another 8-under-par 64, this time at Pebble Beach Golf Links, to take a five-stroke lead over three players in the 81st version in what is now the AT&T Pebble Beach Pro-Am, formerly the Crosby Clambake, on the Monterey Peninsula.

All players in the field will play Pebble Beach, Spyglass Hill Golf Course and the Shore Course at Monterey Peninsula Country Club in the first three rounds before the 54-hole cut is made, and the final round will be played solely at iconic Pebble Beach.

Power’s total of 128 shots for 36 holes broke by one stroke the tournament record set by Phil Mickelson in 2005 and tied by Nick Taylor of in 20200.

“I didn’t know (about the record), but that’s kind of a cool thing,” said Power, who has won six times as a pro, including the 2021 Barbasol Championship on the PGA Tour. “But it’s been one of those couple of days on the course when things have gone my way. Right from the start yesterday, I got a couple of good bounces that got me into the round.

“The biggest thing is, I mean, the way to shoot scores is to hit it close to the hole and make putts. My wedges have been much, much better and my putting’s improved. So, when I hit it in the fairway and I’ve got a wedge in my hand, I feel like I’ve got a very good chance.

“I’m playing Spyglass tomorrow and that’s supposed to be the toughest course, so I hope to keep it going.”

Power, who won four times on the eGolf Professional Tour, made four straight birdies through No. 12, and 10 altogether to go with two bogeys while carding the record score of 16-under 128.

“I was a little shaky off the start, drove it a little crooked and missed some putts in there,” said Hoge, who is seeking his first PGA Tour victory but made a double-bogey on the first hole. So, I righted the ship pretty well from No. 9 on in. I was a little bit flustered with a bogey at the last, but it was nice to make some birdies coming in.”

Fourth-ranked Patrick Cantlay of Los Alamitos and UCLA totaled 4-under 68 at Spyglass as is six behind in a tie for fifth with Matthias Schwab of Austria, who had 11 birdies in a 10-under 62 at Pebble, and Austian Smotherman of Canada, who eagled the 16th hole in a 3-under 68 at Monterey Peninsula.

“Obviously, the lead’s a little ways away, but there’s a lot of golf left, it’s only halftime, right?” said Cantlay, the reigning PGA Tour Player of the Year and FedEx Cup champion. “We should get another couple days of great weather, some of the best I’ve seen at this tournament, so Pebble will probably be ripe for scoring.”

Defending champion Daniel Berger withdrew before the start of the tournament because of a back injury and Will Zalatoris, the 2021 PGA Tour Rookie of the Year, withdrew earlier in the week after testing positive for Covid-19.