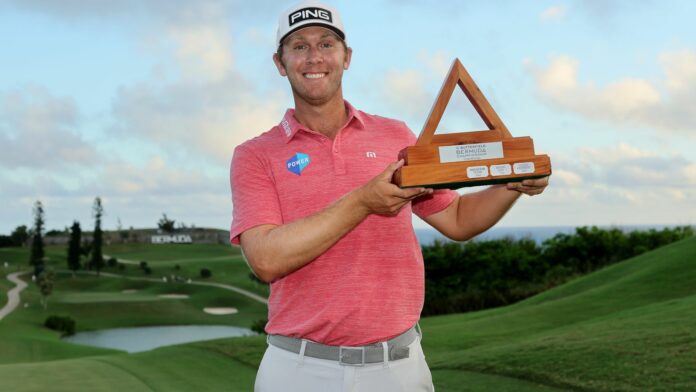 Seamus Power of Ireland was there to win when rookie Ben Griffin faltered.

The 35-year-old Power closed with a 1-under-par 70 to win the Butterfield Bermuda Championship by one stroke over Thomas Detry of Belgium in more windy conditions at Port Royal Golf Course in Southampton, Bermuda.

“It’s been a little while, so it’s great to get into the win column again,” said Power, whose only other PGA Tour victory came in the 2021 Barbasol Championship. “It’s hard to win out here, but I was able to get it done. This is a tough course, especially in the wind, but I was able to hit the ball well and make some putts.

“Just close your eyes and just picture some of those shots. That’s where some of your practice and your training comes in, when you know what to do when those thoughts do come. I knew it was going to be really hard coming in and it was. I made hard work of it at the end, but I’m delighted to get it done.

“This is amazing, it’s just special to win here and I’m over the moon. I don’t think it’s going to sink in for a while.”

Power, who also won the 2016 United Leasing & Finance Championship on what is now the Korn Ferry Tour, made three birdies in the first seven holes and added two more coming home while overcoming four bogeys, to post a winning score of 19-under 265 after carding three straight 65s.

Detry, seeking his first pro victory, birdied the last two holes for a 67, while Griffin held a two-stroke lead after making birdies at Nos. 10 and 11 but followed with four straight bogeys and a double-bogey 6 to shoot 67 and was two shots back in a tie for third with Patrick Rodgers of Stanford, who had a 65, and Kevin Yu of Taiwan, who totaled 70.

“It was a very fun week, but it was a bummer not to be able to hang on down the stretch,” said Griffin, who won the 2018 Staal Foundation Open on the PGA Tour Canada, but quit golf for a while last year. “I just have to be better at the finish. I had a couple shots get loose in the wind and you’ve got to be a little bit better, more precise when it gets windy like that or else you can kind of grind for pars and bogeys quick. It’s a learning experience and I’m just happy to be out here competing.

“I’ve come a long way in the last year and I know that I can win out there, but it’s not that easy playing against the best golfers in the world. I’m just happy to be out here and playing golf for a living rather than sitting in an office someplace.

“I know my time will come soon. I finished third, but I know I’ll get it done one of these days.”

Said Detry: “It was a challenge on every putt, every tee shot, because of the wind. It was a commitment out there.”

Denny McCarthy made five birdies on the front nine en route to a 67 and was one more down in a tie for sixth with Aaron Baddeley of Australia, who finished at 71, while Justin Lower birdied the last two holes to cap a 68 and was four behind in a tie for eight with Max McGreevy, who had four birdies on the back nine in another 68, and Harrison Endycott of Australia also birdied the last two and was five back in solo 10th.