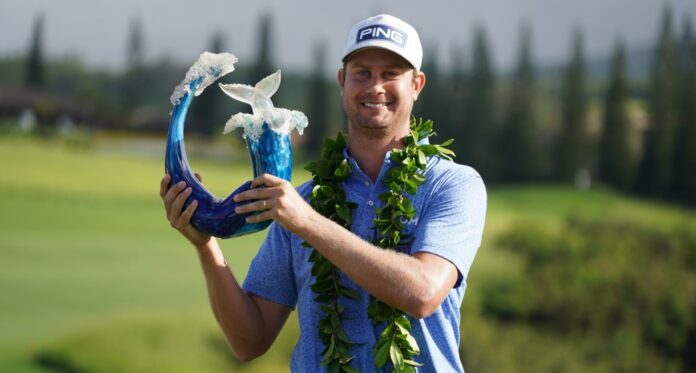 Following a break of several weeks for the holidays, the PGA Tour is back this week for the 70th Sentry Tournament of Champions, which will be played on the Plantation Course at Kapalua Golf Resort on the Hawaiian Island of Maui for the 24th consecutive year.

Only winners of tournaments on the circuit in the last calendar are eligible to play in the event and the only one of those 40 eligible players who will not make the trip to the Hawaiian islands is ninth-ranked Rory McIlroy of Northern Ireland.

No big surprise there, as McIlroy also didn’t make the trip last year.

Harris English (pictured) claimed his third PGA Tour title last year at Kapalua when he beat Joaquin Niemann of Chile with a birdie on the first playoff hole, and English added another victory later in the year when he turned back Kramer Hickock with another birdie on the eighth extra hole in the Travelers Championship.

“Kapalua is super hilly and the greens are crazy, huge greens, a lot of slope in them,” English said after winning last year. “Here is a pretty short golf course, firm, flat. It’s been great. I had a lot of friends out here come up and say congratulations and obviously a lot of texts and phone calls from friends and family. It’s been awesome.

“Just kind of, you never realized how much support you have from people back home and some friends that are watching that are pulling for you. It’s awesome to finally feel that and people saying I made their night, made their week. It’s cool to hear that.”

English will be trying to join Gene Littler, Jack Nicklaus, Arnold Palmer, Tom Watson, Lanny Wadkins and Stuart Appleby of Australia as the only back-to-back winners of this tournament that dates to 1953 a Desert Inn Country Club in Las Vegas, where Al Besselink was the winner.

The only other player in the World Golf Rankings not in the field is third-ranked Dustin Johnson, the 2013 Sentry TOC champion who didn’t win a tournament last year, the first time that has happened since 2014.

Leading the field are top-ranked Jon Rahm of Spain, No. 2 Collin Morikawa of La Canada Flintridge and Cal, No. 4 Patrick Cantlay of Los Alamitos and UCLA, No. 5 Bryson DeChambeau of Clovis, No. 6 Xander Schauffele of La Jolla and San Diego State, No. 7 Viktor Hovland of Norway, No. 8 Justin Thomas and No. 10 Sam Burns.

Other former Sentry TOC champions back include Thomas, Schauffele, Jordan Spieth, Patrick Reed, and Phil Mickelson, the reigning PGA champion who has not played at Kapalua since 2001.

1. Justin Thomas, United States – The eighth-ranked J.T. is looking to move back up in the ranking in a tournament he won in 2017 and 2020, in addition to finishing third in 2019 and last year. Thomas, who captured the Players Championship last year for his 14th career victory on the PGA Tour, has never finished outside the top 22 in six appearances in the Sony TOC.

2. Xander Schauffele, United States – The Olympic Gold Medalist tied the course record by shooting 62 in the final round to win by one stroke over Gary Woodland at Kapalua in 2019, lost his title defense in a playoff with Justin Thomas and was in the hunt last year before finishing in a tie for fifth. Schauffele tied for 22nd in his only other Sentry TOC appearance in 2018.

3. Jon Rahm, Spain – The top-ranked player in the world shut it down after going 3-1-1 in the Ryder Cup in September, so he’s well-rested to start the new year. Rahm, who won the U.S. Open last year with clutch birdie putts on the last two holes, tied for seventh in the Sentry TOC last year, was solo 10th the year before, tied for eighth in 2019 and finished second in 2018.

4. Patrick Cantlay, United States – The 2020-21 PGA Tour Player of the Year won four times last season, including the BMW Championship and the Tour Championship to capture the FedEx Cup. Cantlay, who also won the Zozo and the Memorial, tied for 13th last year, finished solo fourth in 2020 and tied for 15th in 2018 in his three previous appearances in the Sentry TOC.

5. Collin Morikawa, United States – The second-ranked Morikawa, who can take the No. 1 spot in the world rankings by winning this week, captured the Open Championship and the WGC-Workday last year to go with the PGA Championship the year before. In his two appearances in the Sentry TOC, he was in the chase before tying for seventh each of the last two years.

6. Bryson DeChambeau, United States – The power-hitting DeChambeau won the Arnold Palmer Invitational last year after capturing the U.S. Open late the year before and has eight victories on the PGA Tour. He was in the conversation in his last two starts at Kapalua, tying for seventh last year and finishing solo seventh in 2019 after he wound up 26th in his 2018 debut.

7. Viktor Hovland, Norway – Has climbed to No. 7 in the World Golf Rankings after winning a Mayakoba for the second straight year, capturing the BMW International Open and claiming the Hero World Challenge, giving him five victories as a pro—including three on the PGA Tour. Was tied for 10th in his only Sentry TOC start before closing with 76 to tie for 31st last year.

8. Hideki Matsuyama, Japan – The reigning Masters champion also captured the Zozo Championship last year and has seven PGA Tour victories among his 16 career wins as a professional. Matsuyama finished second behind Justin Thomas in the 2017 Sentry TOC, tied for third in 2015 and tied for fourth in 2018, before he struggled to a tie for 41st last year.

9. Harris English, United States – The defending Sentry TOC champion posted four rounds in the 60s and turned back Joaquin Niemann of Chile with a birdie on the first playoff hole for his first victory since 2013. English also won the Travelers Championship in another playoff for his fourth PGA Tour victory. He tied for 14th in his only other appearance in the Sony TOC in 2014.

10. Sungjae Im, South Korea – Claimed his second PGA Tour victory last year in the Shriners Children’s Open after winning the Honda Classic a year earlier, in addition to tying for second in the 2020 Masters among seven top-10 finishes in a little more than one full season. Im played in the Sony TOC last year for the first time and posted four rounds in the 60s to tie for fifth.

1. Garrick Higgo, South Africa – The left-handed Higgo claimed his first PGA Tour victory in the 2021 Palmetto Championship and has seven wins as a pro as he makes his debut at Kapalua.

2. Seamus Power, Ireland – Captured his first PGA Tour victory with a par on the sixth playoff hole to beat J.T. Poston in the Barbasol Championship, his sixth title as a professional.

3. K.H. Lee, South Korea – Earned his fifth professional victory and first on the PGA Tour by three strokes in the 2021 AT&T Byron Nelson. Also was T-2 at Phoenix and T-6 in 3M Open.

4. Talor Gooch, United States – The 2021-22 FedEx Cup points leader after his first PGA Tour victory in the RSM Classic, his second as a pro. Also was fourth in Fortinet, fifth in CJ Cup.

5. Erik van Rooyen, South Africa – His victory in 2021 Barracuda Championship on the PGA Tour was his fourth as a pro. Also was seventh in Northern Trust, fifth in the BMW in playoffs.