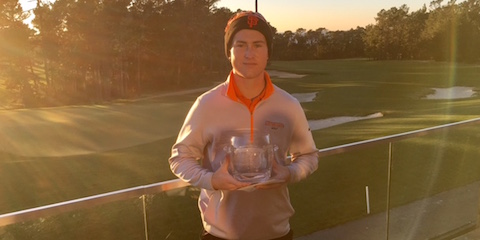 Daniel Pena of Modesto made par on the first playoff hole to defeat Daniel Connolly of San Francisco and win the AmateurGolf.com Tour Championship at Poppy Hills Golf Course in Carmel.

Pena, a freshman at University of the Pacific, and Connolly, a freshman at SMU, both finished at 70-72–142 and went to extra holes after Connolly sank a 15-foot eagle putt on the final hole of regulation.

However, Connolly, the 2016 San Francisco City champion, drove into a fairway bunker on the playoff hole en route to a double-bogey 6, allowing Pena to win with a two-putt par.