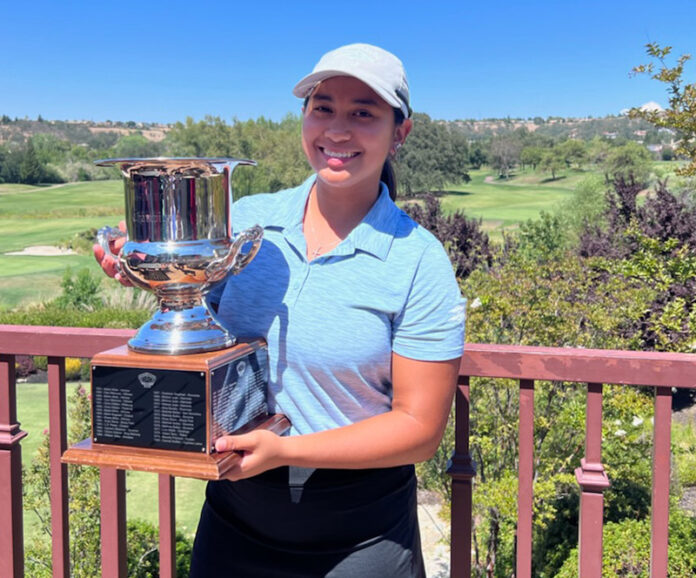 Lorenz Kayla Nocum of Tustin, a senior at the University of Nevada in Reno, captured the 70th Pacific Women’s Golf Association Legacy Open by a whopping 11 strokes over Donna Basil of Palm Springs at Whitney Oaks Golf Club in Rocklin.

“I have had everything handed to me in the Philippines and being here I live alone, and I realized I didn’t know a lot of things, and now that I’m here I learn more and the whole being an independent thing is really something I didn’t think I would do at an early age,” said the  20-year-old Nocum, whose other career victories include the 2017 Enagic Junior Championship, 2016 Philippines Junior Match Play Championship and the 2011 BMW Golf Tournament.

“I know 20 isn’t young for Americans, but for us, people live with their parents until they’re about to get married. I came to the United States because I got a full scholarship to play for the golf team here at UNR. They offered me a good deal and I wanted to play golf at a more competitive level.”

Vivian French of Weed and Lake Shastina Women’s Golf Club was eighth at 86-83—169, followed by Kay Robinson of Healdsburg and Healdsburg Women’s Golf Club, who finished at 88-82—170, while Bonnie Bronson of Palm Springs and LPGA Amateurs Wine Country posted a score of 88-84—172 to tie for 10th with Vicki Philpott of Roseville and LPGA Amateurs Sacramento, who wound up at 88-84—172.

The PWGA Legacy Open was first played in 1953, when Mable Wilde of Hillview Golf Course in San Jose claimed the first of her four victories in the event at Richmond Country Club, where the tournament was played in its first eight years.