No. 1 Stanford, Heck Sweep Gunrock in a Record-Breaking Performance 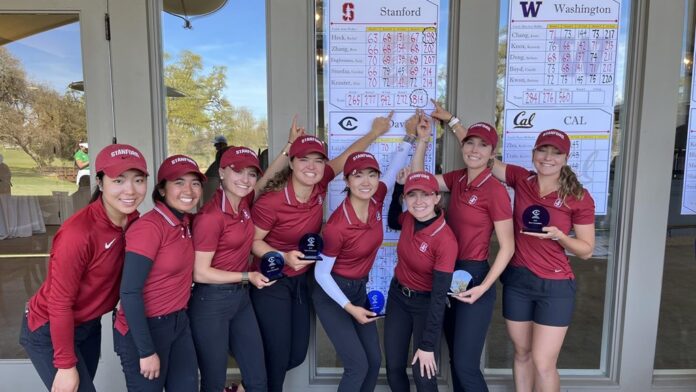 Rachel Heck of top-ranked Stanford, the defending NCAA Women’s individual champion, and teammate Rose Zhang, the top-ranked women’s amateur in the world, finished 1-2 and led the Cardinal to a record-setting 35-stroke victory over Washington in the Gunrock Invitational at Del Paso Country Club in Sacramento.

“I don’t even have words for this,” Stanford Coach Anne Walker said. “It’s so exciting and this team deserves it. We have so many great players top to bottom so to come here and set this record, I’m excited for them, excited for Del Paso the course. I don’t have great words for it but I’m really proud of them.

“It feels great to bounce back after (the Cardinal finished second to) San Diego State (in the Lamkin Invitational). It felt like we were a little rusty coming out of the break. I believe in the system that we have in place. These kids are really strong. Not only are they talented, they’re fighters. Sometimes you’re fighting for a 65 and sometimes you’re fighting for a 75, but when you have a lot of fight in you good things are going to happen.”

“It’s great to see the Rachel Heck who we had here last spring,” said Walker after Heck got off to a slow start this season. ‘She’s so happy. She’s hitting every shot very loose and confident and relaxed. She’s having a great time with the game. To see her get her eighth win today, and I know there’s plenty more ahead, I’m excited to be part of this.

“ … What more can be said about Rose? She’s so steady and I know she’s disappointed this week. And that says it all, the fact that Rose is disappointed in the way she played and she has the fourth-best score in school history. It speaks volumes about who she is as a player that she can come out here with her B game and still be right on Rachel’s heels until the end. She’s got great things ahead of her.”