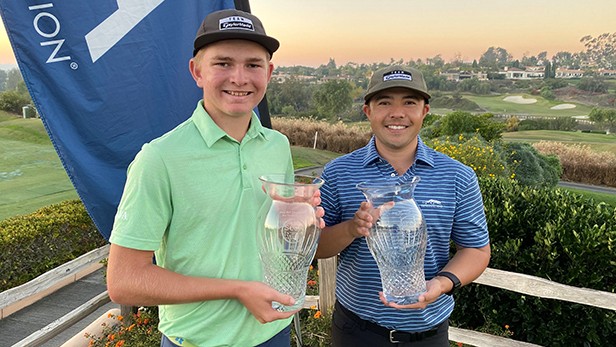 Andrew Morgan of Long Beach and Adam Anderson of Ventura captured the 31st Southern California Four-Ball Championship by one stroke over Luke Potter of Encinitas and Dylan Menante of Carlsbad at The Farms Golf Club in Rancho Santa Fe.

Morgan (pictured left) and Anderson (right), who trailed by two strokes entering the second and final round, carded a score of 64-61—125, 19-under-par, highlighted by Anderson’s eagle on the third hole and five birdies by Morgan on the back nine.

First-round leaders Potter and Menante finished at 62-64—126 and made it close at the finish when Potter made birdies on two of the last three holes, while Tyler Gullickson of Encinitas and Charlie Reiter of Palm Desert were third at 65-63—128, as Reiter collected five birdies on the back nine.

Hunter Reed of Encinitas and Matthew Pennington of Carlsbad were fourth at 64-65—129, while Lincoln Melcher and Jin Nakao of Burbank shot 68-64—132 to tie for fifth with Scotland Schmidt and Elijah Poppers of San Diego, who finished at 67-65—132.

Colin Huang and Robert Keilch of Newport Beach totaled 70-63—133 to tie for seventh with Bret Parker of Orange and Torey Edward of Long Beach, who wound up at 66-67—133, while Kevin Tassistro of San Marcos and Nick Geyer of San Diego were ninth at 64-70—134.