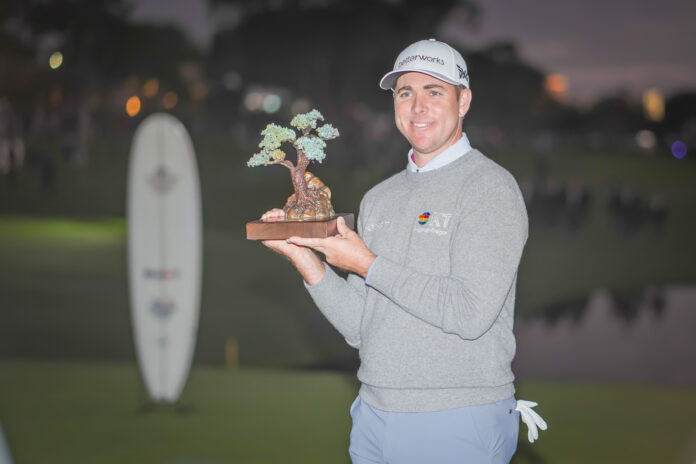 The 37-year-old List hit a brilliant approach shot to within a foot of the hole to make a birdie on the first playoff hole to turn back Will Zalatoris and win the Famers Insurance Open on the South Course at Torrey Pines Golf Course in La Jolla in a rare Saturday finish on the PGA Tour.

“This is what it’s all about,” said List, who celebrated with his family, including his young daughter, Ryan, who has been telling him for a while that he needed to win a trophy. “I was just happy to get into the playoff and this really hasn’t sunken in yet.

“I was disappointed not to make that putt on the 17th hole in regulation, but I made a great putt on the last hole to give myself a chance to win. After that, I just hit a few balls on the range and keep myself ready in case there was a playoff.

“To etch my name on this trophy is really special and it’s been a long time coming.”

List, who won twice on the Korn Ferry Tour and three times previously as a pro, sank a five-foot birdie putt on the 16th hole and 13-footer for birdie on the last after a bogey at No. 17 to shoot 6-under-par 66 and record a 72-hole score of 15-under 173.

Zalatoris, the 2021 Rookie of the Year who still has not won on the PGA Tour, barely missed an eight-foot birdie putt for the victory on the final hole of regulation to post a 67, and then missed again from the same area in an effort to prolong the playoff.

“It was fun and I fought like hell all day,” said Zalatoris, who claimed his 10th top-10 finish on the PGA Tour without winning. “I wasn’t really happy with the way I played yesterday, but I was much better today and gave myself a chance to win.

“I thought I made the putt on the last hole of regulation, but I guess I just didn’t hit it hard enough and it broke to the left at the last second. I thought I hit two good putts on 18 in regulation and the playoff, but they just didn’t go in.

“But I like where my game is right now and I’m looking forward to playing courses I really like this week at Pebble Beach.”

Top-ranked Jon Rahm of Spain, who captured the 2021 U.S. Open at Torrey Pines and won the 2017 Farmers for the first of his six PGA Tour victories, sank a 26-foot birdie putt on the 17th hole, but could only make par on the last and finished with a 71 and was one stroke behind in a tie for third.

Jason Day of Australia, who won the Farmers in 2015 and 2018, holed out for an eagle from 118 yards to tie for the lead but then made two bogeys and finished at 72, to wind up in the tie for third with Rahm and Cameron Tringale of Laguna Nigel, who sank a six-foot birdie putt on the last hole for a 70.

Joaquin Niemann of Chile birdied the last hole for a 67 and was two shots down in a tie for fifth with Justin Rose of England and Pat Perez of San Diego, who both had 68s, Sungjae Im of South Korea, who totaled 71, and Aaron Rai of England, who came in at 72.

Sixth-ranked Justin Thomas tied for 20th after a 74, third-ranked Dustin Johnson shot 73 to tie for 25th, Masters champion Hideki Matsuyama of Japan tied for 30th after a 68, Olympic Gold Medalist Xander Schauffele of La Jolla and San Diego shot 72 to tie for 34th and defending champion Patrick Reed tied for 46th following a 73.