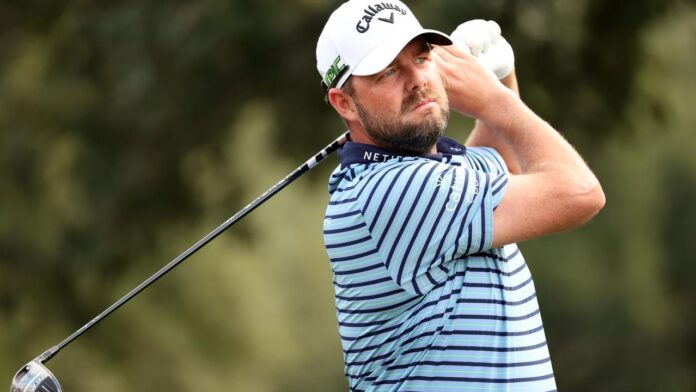 Marc Leishman of Australia failed to make it to the 2020-21 Tour Championship, but after taking time off his game seems to be back.

The 38-year-old Leishman (pictured) played flawlessly until a bogey on the last hole and shot 5-under-par 65 to tie Russell Henley, Talor Gooch and Luke List for the lead in the first round of the 74th Hewlett Packard Enterprise Houston Open at Memorial Park Golf Course in Houston.

Play was halted by darkness with 70 players still on the course because of a 2½-hour rain delay in the morning and they will return early Friday to finish the first round before the start of the second round.

“It was obviously pretty disappointing not to get to East Lake,” said Leishman, who has won six times on the PGA Tour among his 13 pro titles. “But I guess the time off might have helped me, it might make this next season a really good one. I hope that’s the case. Probably for about six months I feel like I’ve been playing OK, just not getting anything out of it.

“So I worked on my wedge game, everything inside 150. And I’ve started making putts, really that’s the difference. It can be a crazy game. It can get you down because you can play really well and not have a good score, then play mediocre golf and have a really good score.

“You have to not let that get to you so I think a fresh season, a new start was pretty good for me. Got me to knuckle down and just really focus on playing some good golf.”

Leishman, who won the 2021 Zurich Classic of New Orleans with teammate Cameron Smith and captured the 2020 Farmers Insurance Open, collected three of his six birdies on the last four holes of the front nine and only a poor drive on the last hole cost him a bogey in his 65.

Gooch, who tied for fourth in the Fortinet Open, tied for fifth in the CJ Cup and tied for 11th at Mayakoba to start the new season, had four birdies on the front nine and birdied the last three holes in his 65.

“Yeah, anytime you’re playing well you try to grab on to that momentum, and it can be tough to take it week-to-week in golf because there’s such a pause between tournament round and the next week’s tournament starting,” said Gooch, whose only pro victory came in the 2017 News Sentinel Open on what is now the Korn Ferry Tour.

“So, you just try to do everything you can to keep doing the same things. I’ve been able to keep doing that through the stretch, so hopefully we can continue it for the rest of this week.”

Henley, whose three PGA Tour victories include the 2017 Houston Open, had three of his six birdies down the stretch in his 65, while List holed out from 179 yards for an eagle on the 14th hole and was at 5-under through 15 when the end came.

Jason Dufner, the 2013 PGA champion, was solo fifth after making three birdies on the back nine in a bogey-free 66, while Keith Mitchell and Ben Silverman of Canada both had only one bogey in their 67s and are tied for sixth.

Adam Scott of Australia, the 2007 Houston Open champion, shot 68 and was in a tie for 12th that included 2010 U.S. Open champion Graeme McDowell of Northern Ireland and Matthew Wolff of Agoura Hills.