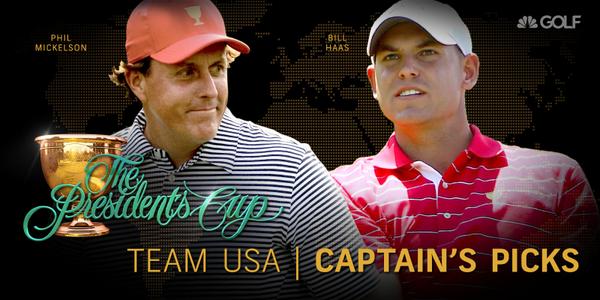 Jay Haas selected his son, Bill Haas, and Phil Mickelson as his Captain’s Picks for the United States team in the President’s Cup, which will be played Oct. 8-11 at Jack Nicklaus Golf Club-South Korea in Incheon City, South Korea.

Sangmoon Bae of South Korea and Steven Bowditch of Australia were the Captain’s Picks chosen for the International team by Nick Price of Zimbabwe.

“I can’t tell you how honored I am to be picked,” said Bill Haas, who finished 11th in the U.S. point standings, one spot out of an automatic berth on the team. “I really, really wanted to make the team outright. I can’t explain how I feel.”

Said Mickelson, who has played in all 10 previous President Cups and was only 30th in the standings: “This means a lot to me and I find that these events are where real relationships are formed with the players.”

“If anyone deserves a pick, it’s Phil Mickelson,” Jay Haas said. “He is without question the leader of our team in the team room, on the golf course. The guys on the team trust him 100 percent.”