Lee Gets First PGA Tour Win in the Rain 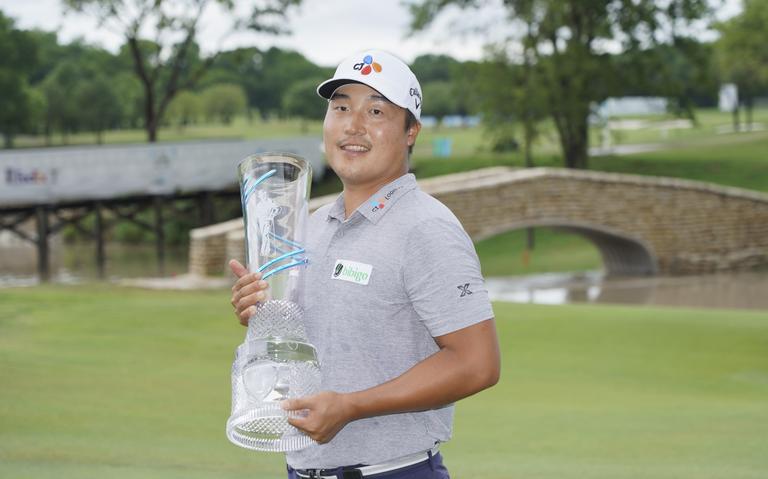 Kyoung-Hoon Lee of South Korea weathered the storm and became a winner on the PGA Tour for the first time.

The 29-year-old Lee had to wait out a rain delay of nearly 2½ hours late in the day, but shot 6-under-par 66 in the final round to win the AT&T Byron Nelson by three strokes over Sam Burns at TPC Craig Ranch in McKinney, Texas.

“It was a long time coming for me and I need more English to explain what it means,” Lee said after winning in his 80th start on the PGA Tour. “I had to wait so long for this to happen, sometimes I wondered if it was possible.

“I’m so happy for this win and I still can’t believe it. I just had a strong mind and played some good golf. I’m just so excited to win. Before a lot of times I imagined what it would be like to win. Like, yeah, like fist pump or I imagined a lot of things, but I’m just too excited. I almost forget everything.

Lee, who has won four times in Asia and earned his first start in the PGA Championship beginning Thursday in Kiawah Island, S.C., took control by making birdies on five of the first eight holes in the last round. He capped his victory with birdies on the last two holes as the rain continued to finish at 25-under 263.

Burns, who won the Valspar Championship for his first PGA Tour victory in his last start two weeks ago and led this event after the second and third rounds, fell behind by making two bogeys on the first four holes and needed a birdie on No. 18 to salvage a 70.

“I think the biggest thing for me is just knowing my game is in a good place,” the 24-year-old Burns said. “It’s in a good spot enough to where I can contend. So that’s cool for me, just to see some results for some of the stuff I’ve been working on back home.”

Patton Kizzire collected 10 birdies in a 63 that was the low score of the day and finished four shots back in a tie for third with Daniel Berger, who made five straight birdies through No. 10 in a 64, Scott Stallings, who totaled 66, and Charl Schwartzel of South Africa, who wound up at 68.

Troy Merritt birdied the last two holes for a 65 and was two more down in a tie for seventh with Joseph Bramlett of Saratoga and Stanford, who birdied four of the first six holes to kick-start a 66.

Jordan Spieth, playing for the first time in a month after overcoming Covid-19 following a victory in the Valero Texas Open and a tie for third in the Masters, closed with a 71 finish nine strokes behind in tie for ninth with Jhonattan Vegas of Venezuela, who birdied the last two holes for a 67, and Seamus Power of Ireland and Doc Redman, who both came in at 70.

Spieth will try to complete the Career Grand Slam by winning the PGA Championship.

Third-ranked Jon Rahm of Spain tied for 34th after a 70, Masters champion Hideki Matsuyama of Japan also shot 70 to tie for 39th, defending champion Sung Kang of South Korea tied for 47th after a 69, and fourth-ranked Bryson DeChambeau of Clovis also shot 69 and tied for 55th.

Kang and South Korean superstar K.J. Choi congratulated Lee behind the 18th green after he putted out for the victory.