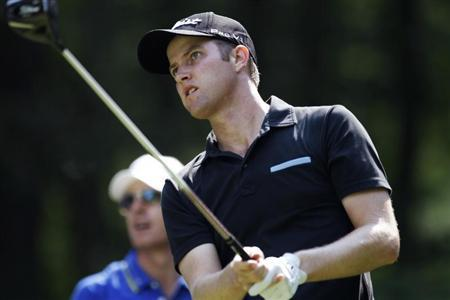 Chris Kirk holed a nine-foot birdie putt on the 18th hole to take a one-stroke lead over Harris English and Will Wilcox heading to the final round of the Sony Open in Hawaii at Waialae Country Club in Honolulu.

Kirk, seeking his third PGA Tour victory after winning the 2011 Viking Classic and the  McGladrey Classic last November, carded six birdies, including three on the last seven holes in a round of 5-under-par 65.

“I was fortunate that I remembered having that putt before,” Kirk said of his closing birdie. “It had a little left-to-right break and I made a good one.

“I got a few breaks today because when I missed the fairway, I didn’t have very difficult lies and I was able to guess the fliers right.”

Wilcox, who captured the South Georgia Classic on the Web.com Tour last year but has never won on the PGA Tour, recorded a 64 that equaled the best round of the day, making seven birdies and a single bogey at No. 15.

English, who won the 2013  FedEx St. Jude Classic and added the OHL Classic at Mayakoba in November at the start of the PGA Tour’s new wrap-around schedule for 2013-14, had six birdies in a round of 67.

Jerry Kelly, who has won three times but not since the 2009  Zurich Classic of New Orleans, shot 66 and was tied for fourth with Jimmy Walker, the Frys.com Open winner last fall, who had a 67.

Zach Johnson, who won the Hyundai Tournament of Champions last week, recorded a 66 and was in a tie for sixth, three strokes back.

Jason Dufner, the PGA champion, came in at 67 was tied for 13th but still within striking distance four shots back, and Masters champion Adam Scott struggled to a 71 and was in a tie for 27th, seven strokes behind.